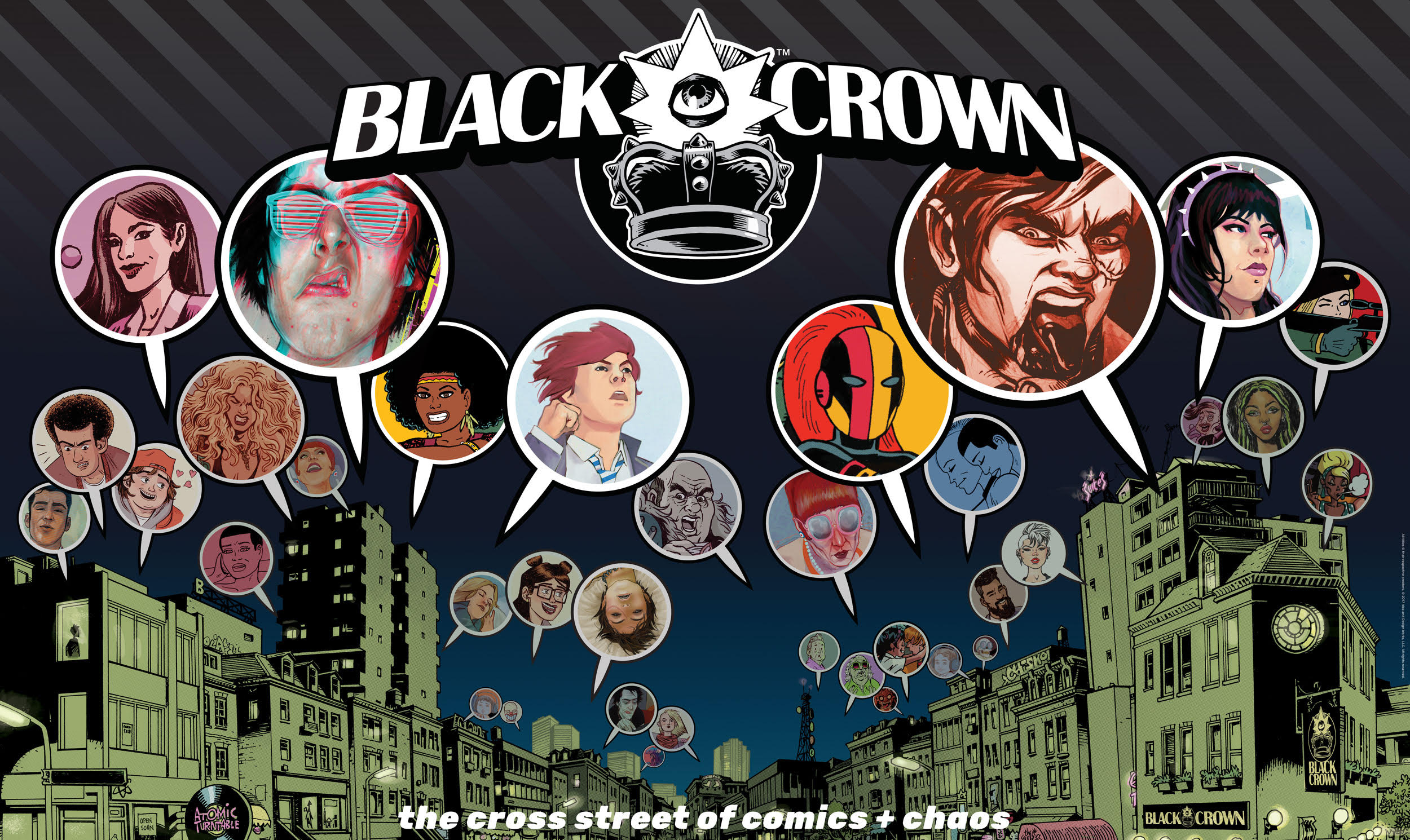 Situated at the cross street of Great Yarn and Canon, the Black Crown Pub anchors a peculiar street where characters commingle and corrupt.  As previously announced, notorious editor Shelly Bond has opened up shop at IDW Publishing and is hurtling towards the launch of her creator-owned imprint, Black Crown. Peter Milligan (Britannia, Shade, the Changing Man) and Tess Fowler (Rat Queens), whose KID LOBOTOMY will be Black Crown’s debut title in October, now welcome some rambunctious new residents to the neighborhood.

Come December, writer Tini Howard (The Skeptics) and Gilbert Hernandez (Love and Rockets) will combine their talents on a 6-issue miniseries with more attitude than you can shake a sword or a game controller at in ASSASSINISTAS. Octavia is an ex-hitwoman who comes out of retirement to pay for her son’s college tuition — and, with any luck, rescue the kidnapped child of one of her former bounty-hunting partners. Octavia recruits her reluctant son Dominic and his boyfriend Taylor to become the next generation of ASSASSINISTAS.

Then in January, the British invasion is back in full force with PUNKS NOT DEAD, co-created by novelist David Barnett (Calling Major Tom, Gideon Smith series) and artist Martin Simmonds (Death Sentence). Fergie is a lonely, bullied teenager raised by a single mom who unexpectedly finds himself in search of the dad he never knew.  But Fergie won’t be traveling alone.  For some reason a strange branch of MI5 is hot on Fergie’s trail. Could it be the ghost of Sex Pistol Sid Vicious who becomes Fergie’s ethereal companion and unlikely father figure? Bound to Fergie for reasons unknown, is Sid in search of redemption himself or out to prove that punk is alive and well 40 years later?

Right on the heels of KID LOBOTOMY is the BLACK CROWN QUARTERLY, a 48-page compendium of all things comics, culture, and cool. It features a wraparound cover and a regular 10-page lead story set in the Black Crown Pub by Rob Davis (The Motherless Oven). Other features include a two-sided pull-out poster with a view of the street and Frank Quitely’s KID LOBOTOMY #1 B-cover, music connections via CUD: Rich and Strange and Swell Maps, Canonball Comics, an exquisite corpse, and much more.

For those attending Comic-Con International in San Diego, you can swing by the IDW Publishing booth #2743 and pick up the Black Crown preview book now, a Black Crown enamel pin, or a Black Crown button.