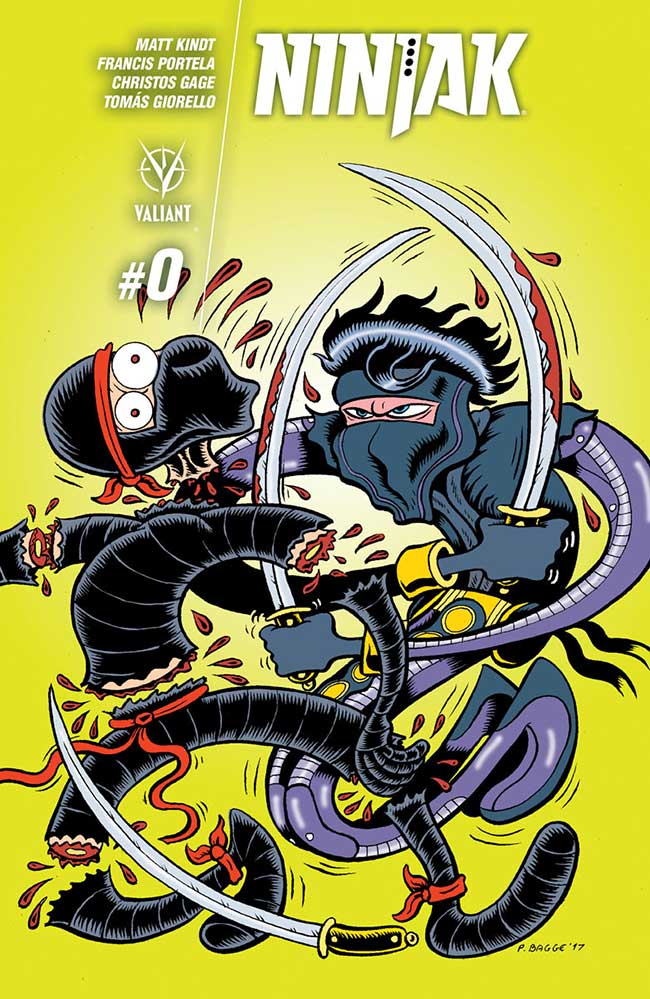 Valiant Entertainment sent Major Spoilers a first look of the upcoming Ninjak #0. The issue arrives in September, and according to the company, is a perfect jumping on point for new readers.

NINJAK #0
Written by MATT KINDT with CHRISTOS GAGE
Art by FRANCIS PORTELA & SPECIAL GUESTS with TOMÁS GIORELLO
Cover A by DAVID MACK (JUL172260)
Cover B by CLAYTON HENRY (JUL172261)
Cover C by YAMA ORCE (JUL172262)
Variant Cover by PETER BAGGE (JUL172264)
Variant Cover by JAVIER PULIDO (JUL172265)
Ninjak Vs. The Valiant Universe Variant Also Available (JUL172263)
$3.99 | 40 pgs. | T+
FIRST: Matt Kindt closes the book on his best-selling, record-setting run as Ninjak journeys back to his most formative years of training…and makes a shocking discovery that will clash with his present – as illustrated by fan-favorite artist Francis Portela and a blockbuster cast of comics all-stars, each chronicling a different bloody step in Colin King’s bone-breaking journey to the forefront of the Valiant Universe!

Behind the years of training… Underneath the high-tech gadgetry… MI-6’s most experienced operative is still flesh and blood. So just how is a mortal man like Colin King able to survive in a world filled with telekinetic psiots, eternal warriors, and sentient suits of alien armor? The key to Ninjak’s survival is buried deep in the past…and today the world’s most dreaded super-spy prepares to reveal his most closely guarded secrets!

THEN: Prepare for Ninjak’s launch into a brand-new ongoing series this November in NINJA-K #1 as Christos Gage and blockbuster artist Tomas Giorello takes the reins of Colin King’s death-defying escapades with a stunning prelude tale that directly sets the stage for the winter’s most anticipated series!