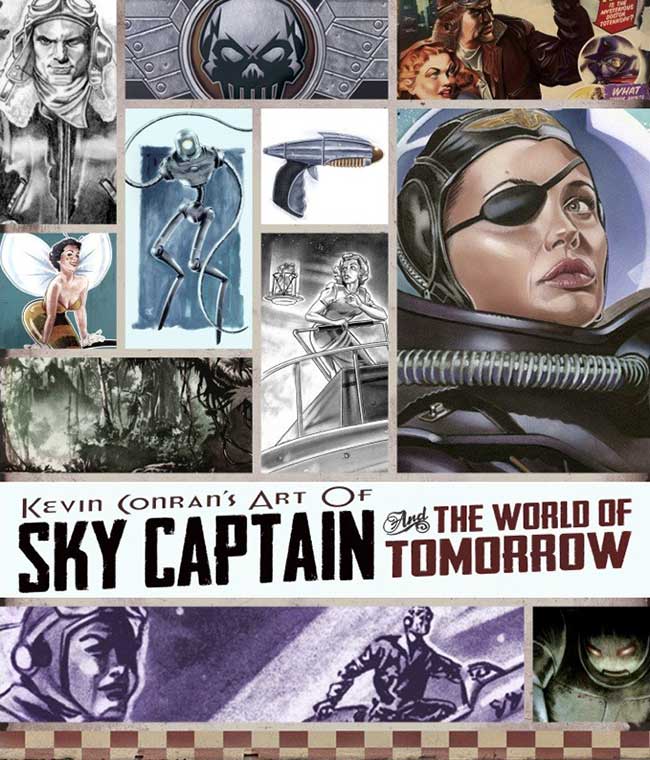 Kevin Conran’s Art of Sky Captain and the World of Tomorrow charts the revolutionary artistic contributions to the film by its principle visual architect, Sky Captain’s co-creator Kevin Conran. The groundbreaking feature film, Sky Captain and the World of Tomorrow, was the first of its kind – it completely embraced the look and feel of the old serials while pushing the boundaries of modern filmmaking technology. The film inspired a whole new generation of filmmakers to adopt their innovative techniques that are now commonplace in every studio feature being made in Hollywood and around the world.

This stunning collection will provide a comprehensive gallery of Kevin Conran’s trailblazing illustrations and designs, including incomplete and unpublished work never-before-seen by the public at large! Kevin Conran’s Art of Sky Captain and the World of Tomorrow is the first official collection of such artwork. Sourced from his private collection, this book spans over 20 years of the movie’s unique illustrations and includes behind-the-scenes details on how the movie was conceived of, illustrated, approved (or rejected), and brought to life. Whether you’re a fan, collector, enthusiast, or new to the world of Sky Captain, this book offers the most complete collection of Sky Captain artwork ever produced!

Kevin Conran’s Art of Sky Captain and the World of Tomorrow will be available in book stores and comic book shops (who order the book), as well as on a number of digital formats.

I followed the production of this movie since the early days, and I can’t wait to see more of the behind the scenes work that went into the movie.