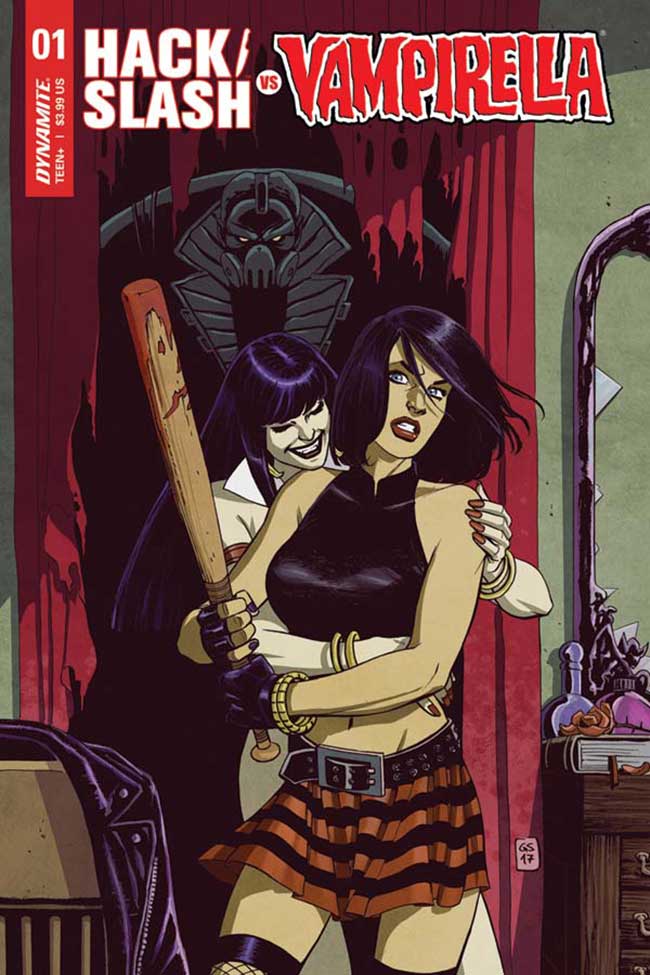 [SDCC’17] Hack/Slash to crossover with Vampirella in October

Dynamite Entertainment has announced Hack/Slash vs. Vampirella for an October 2017 release.

Created by writer/artist Tim Seeley and Stefano Caselli, Hack/Slash harkens back to the classic 80’s slasher flick, as it follows the story of young Cassie Hack, the very epitome of horror movie clichés: the young woman and lone survivor at the end of every horror movie who then channels her emotional trauma into becoming the ultimate “killer of killers” herself! “Along with a burly protector named Vlad, Hack travels across the country hunting slashers in the vein of Halloween’s Michael Myers, Friday the 13th’s Jason Voorhees and A Nightmare on Elm Street’s Freddy Krueger.”

Now, the Vegas strip heats up as Cassie Hack, accompanied by her protector Vlad, are on the trail of a deadly slasher and meet the lovely, yet lethal Vampirella. The team-up event you’ve been waiting for is a high-stakes game of chance when they have to take on The Queen of Hearts!

Hack/Slash creator Tim Seeley said in a press release, “Vampirella is the original horror exploitation heroine, and it’s been a goal of mine since I started Hack/Slash back in 2004 to have her team up with Cassie and Vlad! Dynamite has recruited some awesome talent to handle this never-before-seen tale, which will tie back to the new Hack/Slash series from Image.

While Seeley will not be writing the series for Dynamite, the comic book publisher has tapped Shawn Aldridge and artist Rapha Lobosco to bring this series to life.

This should be a lot of fun… the gory horrific kind that makes you want to read more horror comics.

Hack/Slash vs. Vampirella #1 hits store shelves on October 4, 2017 – just in time for Halloween.