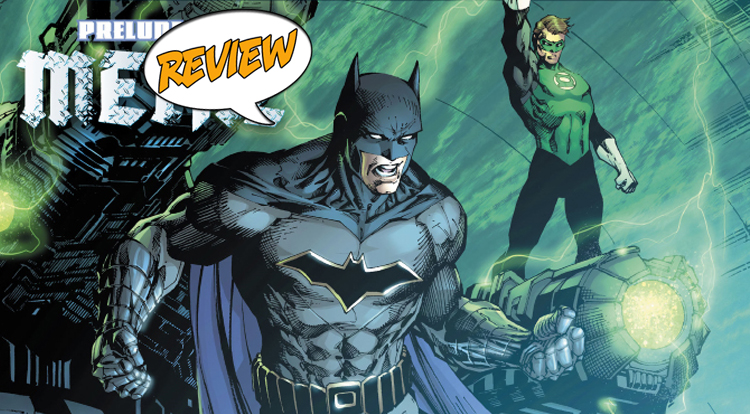 Maybe it’s just me, but “Prelude To Metal” sounds like a REALLY great name for an album…  Your Major Spoilers review of Dark Days: The Casting #1 awaits! Previously in Dark Days: The Casting: The Joker’s surprise attack threatens to lay waste to all of Batman’s carefully laid plans.  Will the Dark Knight be able to regain the trust of his closest allies, Green Lantern and Duke, and prevent the forces of darkness from consuming the DC Universe?!  Will Hawkman’s warning stop our heroes from peering into the abyss?”

A GATHERING OF IMMORTALS

As the story opens, we find ourselves reading from the journal of Carter Hall, Hawkman, a tale of what happened when he discovered the truth about his immortality.  I’m not sure how much of this has been foreshadowed in books I don’t read, but the gist of it all is in these pages: The immortals of the DCU, the Phantom Strangers, the Wizard on giant rocks, the Ra’s Al Ghuls all have something in common, and that something seems to be a strange metal.  The Nth Metal of the Hawks is part of it, as well as a mysterious dagger that the wizard Shazam created, and it’s terrifying enough that even the gods of Olympus have closed off their portal to the mortal world.  Wonder Woman’s explanation of that portion provide Batman with an ancient mystical sword, a relic that leads him to the next level of his chase, while Green Lantern and Duke are forced to face the madness of The Joker (this is specifically the New 52 Mistah J, who cut his face off and tried to kill all Bats’ partners and friends) leading to the last page reveal that something even more terrible is coming, and the war between Bats and Birds is about to heat up.

This issue really got under my skin, taking on many pieces of the history of the DCU, tying in the original Challengers of the Unknown, The Blackhawks, Hawkman and Hawkgirl and more into a larger narrative.  Scott Snyder has apparently been hiding clues and teases about this from the beginning of his run, and the assembly of those clues into something more is well-executed in these pages.  Batman as a central character makes perfect sense, as well, with his ties to technology, the gods and greater mysteries, and the moment where he finally builds his strange machine is a satisfying moment.  The art is by diverse hands, and while you can absolutely tell when Jim Lee gives was to John Romita, it helps to emphasize the sprawling nature of the story, making it truly feel like we’re spanning the history and breadth of the DCU.  (Having Adam Kubert drawing Hawkman in a style that reminds me of his late father is a stroke of genius on someone’s part, by the way.)

THE BOTTOM LINE: I DON’T KNOW WHAT’S GOING ON, BUT IT’S EXCITING

I know that I didn’t get everything going on in these pages, but I absolutely want to read more, right now, to find out what I’ve missed.  (I also wouldn’t mind an annotated version of this story that would link me to the books that would help flesh it out.)  Dark Days: The Casting #1 is that rarest of beasts, a prelude story that isn’t just a series of trailers but a fleshed-out narrative in itself, with several different artists delivering strong work that comes together as a whole and makes you want to know the secret of the Metal, earning 4 out of 5 stars overall.  If nothing else, it’s great to see Hawkman alive and well on the page, but the quality of storytelling in these pages is worth the price of admission, even if you haven’t been following Batman’s solo books…

There's a patchwork of artists and writers here, but it comes together well and has one heck of a final-page kicker...