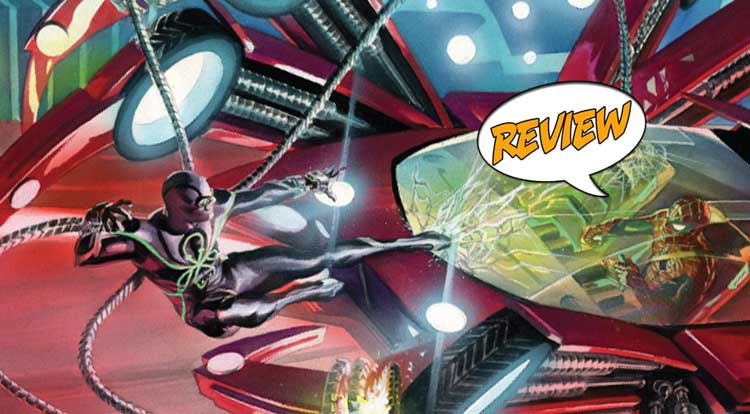 Parker Industries is mired in another business mess and their Friendly Neighborhood CEO has a lot on his plate.  Of course, the takeover of the United States by one of his most respected allies has thrown another wrench into the machine…  Your Major Spoilers review of Amazing Spider-Man #30 awaits! Previously in Amazing Spider-Man: “Parker Industries, the company owned and operated by Peter Parker, AKA The Amazing Spider-Man, has been facing one disaster after another.  Recently, Peter used its resources to liberate the nation of Symkaria.  The situation became an international incident and the latest in a growing list of the company’s debacles.  Meanwhile, Doctor Octopus, who had a hidden hand in creating Parker Industries, has grown disgusted with the path Peter has put the company on.  Doc Ock has had enough and joined forces with Hydra to loot, sabotage and destroy Parker Industries.  Ock launches an attack against Spider-Man in P.I.’s London branch.  Spider-Man looked like he was gaining the upper hand, but had to leave mid-fight to fly back to America and help his fellow super-heroes stop Hydra’s all out assault on Washington D.C.”

This issue picks up seconds after Captain America reveals that, not only is he the head of the new Secret Empire, but he has the hammer of Thor, with the heroes in disarray.  In the midst of his shock, Spider-Man realizes that, while Cap is the man who never gives up, he’s no slouch himself, quickly gathering the anti-Hydra forces and engineering a momentary retreat.  It’s nice to see Spider-Man take that role so naturally, and the other heroes immediately respond to his command.  Getting clear with Mockingbird, Spider-Man goes to ground and we get a sweet little relationship tease moment where she kisses him and agrees to the date he so awkwardly requested a couple of issues ago.  While Spider-Man regroups, Doctor Octopus travels to San Francisco, where the city has been ceded over to mutant control.  In return for engineering their new sanctuary, Ock demands access to the SF branch of Parker Industries, thinking Peter has gone into hiding there.  He is wrong, leading to a showdown a bit later at the Shanghai branch, where Otto reveals his secret: A backdoor program allowing him control of Parker’s own company and technology!

…BUT I REALLY DISLIKE SECRET EMPIRE

The downside of the whole story, though, is the dismal backdrop of Secret Empire, full as it is with sturm and drang and manufactured melodrama.  It’s great to see Peter Parker responding to adversity with personal growth, and his effortless transition to battlefield general is truly impressive, but it’s all held down by a couple of factors:  Peter once again seemingly fails to see the obvious facts before him (specifically regarding Ock’s role in the creation of his empire) and the Secret Empire stuff is JUST SO OVER THE TOP in its tone that it’s hard to take any of it seriously.  That said, I like the art in this issue a lot, and Immonen’s take on the new Doctor Octopus uniform (combining Spider-Man’s uniform, the Hydra motif and his own old-school look into one) is really well-handled.  A battle involving multiple Spider-Mobiles, hero and villain on the side of a skyscraper is incredibly well-drawn,

In short, Slott and Immonen and the creative team have worked really hard to make the balance between Spider-Man story and crossover story work within their framework, but there isn’t enough to the main story other than the shock value.  Amazing Spider-Man #30 has some excellent art, some wonderful Peter Parker moments, heavy-duty Spidey/Ock rivalry and uses the tone of Secret Empire to good effect but still getting dragged down by it, leading to a better-than-average 3 out of 5 stars overall.  I hope that next issue has a little more agency for Parker and a little less of the Empire, but this issue isn’t a bad overall read…

Spider-Man at his best, even while the world is at it's worst. It's an issue full of fun Spidey stuff, dragged down by the crossover madness...