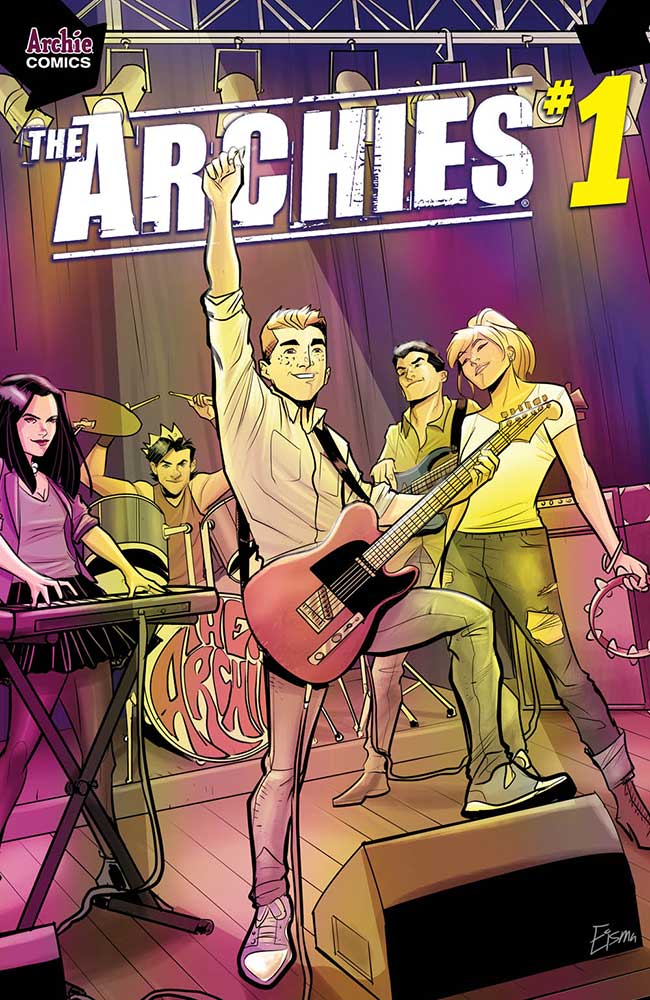 [Solicitations] The Archies hit the road in new ongoing series

The all-star team of co-writers Alex Segura and Matt Rosenberg (ARCHIE MEETS RAMONES) and artist Joe Eisma (ARCHIE, RIVERDALE) reunite the teenage rockers known as THE ARCHIES this October for a new ongoing series spinning out of the fan-favorite THE ARCHIES ONE-SHOT!

After successfully playing their first real show together as a band, Archie, Jughead, Betty & Veronica, and Reggie leave Riverdale as they begin their first tour across the country – and meet real-life bands along the way!

Segura & Rosenberg, the writing team behind hit one-shots ARCHIE MEETS RAMONES and THE ARCHIES, are no strangers to mixing the real-life world of music with the colorful fantasies of Archie Comics.

“When we jammed on THE ARCHIES ONE-SHOT, it was always in the hopes of having the book become an ongoing, so it was great to see the positive response that made it possible,” said Segura. “Adding real bands in the mix gives the series a must-read twist and opens the door for Matt, Joe and I to get our favorite bands into Riverdale.”

“We’re taking The Archies out of Riverdale and sending them on tour across the country to experience everything a touring band goes through,” said Rosenberg. “So whether you grew up with Archie or you’ve never read a comic, here’s a great chance to hop in the van with these 5 old friends and experience something totally new.”

Artist Joe Eisma, colorist Matt Herms, and letterer Jack Morelli, the art team from March’s hit one-shot, will reunite to bring all the drama and excitement of THE ARCHIES to life in the new series.

“What Alex and Matt have cooked up pretty much defines the ultimate comic for me, said Eisma. “I can’t wait for readers to see the great stuff we have in store!”

A new rock and roll adventure with The Archies is about to begin – are you ready to sing along?