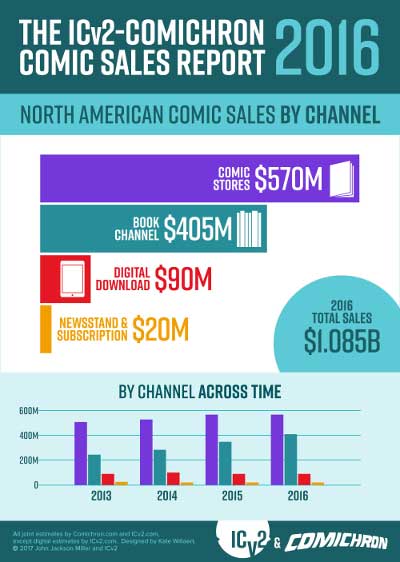 ICv2 and Chomichron’s John Jackson Miller have compared notes, and shared data, and have concluded 2016 wasn’t so bad for comic sales after all. According to the joint estimate, the comic and graphic novel market grew by 5% in 2016.

The data only tracks sales in the U.S. and Canada, but now we can all happily proclaim that comic books and graphic novels are a billion dollar industry – $1.085 billion to be exact, which is a $55 million increase over sales in 2015.

Here is where the data gets very interesting, and may be an indicator of how the market may turn in the next couple of years.

For the last couple of years on the Major Spoilers Podcast, I’ve been advocating for publishers to move to a graphic novel/trade first format and move away from the single issue release. The data from ICv2 and Comichron seem to indicate that  graphic novel and trade paperbacks is where it is at.

So, which publisher will be the first to do this? DC Comics’ Earth One is very close to this, and those one-shot graphic novels sell quite well, but I really think Marvel could launch a new initiative with the return of the Fantastic Four. Sales of a $14.99, 130-page original trade featuring the return of the first family of comics would sell through the roof.

Also, in case this is too much to read, Comichron and ICv2 sent along several infographics to spell it out for you. What are your thoughts on this new information?

via ICv2 and Comichron