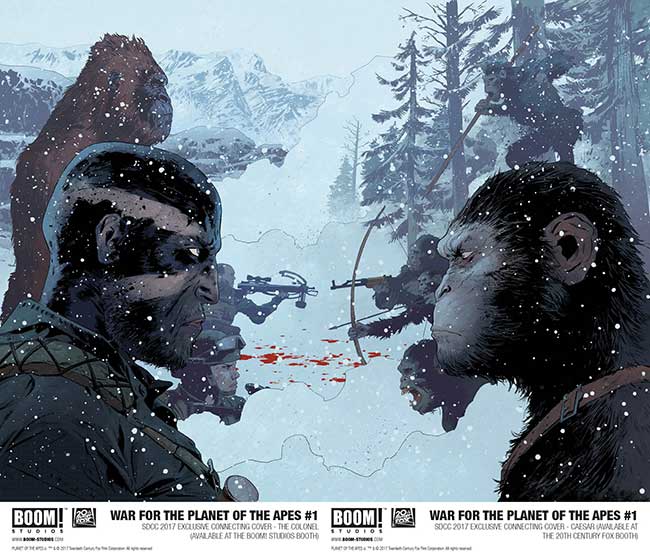 The first exclusive cover, limited to a print run of 2,000 copies, will be available for FREE at the Fox booth (#4229) at SDCC, featuring Caesar, as played by Andy Serkis in the film. The second chase cover, strictly limited to only 500 copies, will be available for $10 at the BOOM! Studios booth (#2229), featuring The Colonel, as played by Woody Harrelson. The covers, which connect to form one image, are illustrated by Robert Sammelin (Planet of the Apes/Green Lantern).

“War for the Planet of the Apes is one of the most anticipated films of the year and we’re excited to have our official prequel series launch alongside it,” said Filip Sablik, President of Publishing & Marketing, BOOM! Studios. “It’s even more exciting to team up with Fox at Comic-Con to deliver two limited-edition covers for the inaugural issue, forming one incredible image that no fan of these damn dirty apes will want to miss!”

Written by David F. Walker (Tarzan on the Planet of the Apes) and illustrated by Jonas Scharf (Warlords of Appalachia), BOOM! Studios’ War for the Planet of the Apes comic series is an original story set between 20th Century Fox’s films, 2014’s Dawn of the Planet of the Apes and the upcoming eponymous film. As Caesar and his apes recoup and recover after the Kubo-led attack on the human compound in San Francisco, the military begins moving in, setting the stage for the momentous war to come.

War for the Planet of the Apes is the latest release from BOOM! Studios’ eponymous imprint, home to a diverse group of original and licensed comic book series, including The Woods by James Tynion IV and Michael Dialynas, Klaus by Grant Morrison and Dan Mora, Grass Kings by Matt Kindt and Tyler Jenkins, Mighty Morphin Power Rangers, WWE, Sons of Anarchy, and Big Trouble in Little China.

Print copies of War for the Planet of the Apes #1 are available for sale starting July 12th at local comic book shops (to find a shop near you, visit comicshoplocator.com) or through the BOOM! Studios webstore, and digital copies can be purchased from content providers including comiXology, Kindle, iTunes, Google Play, and the BOOM! Studios app.

For more information on the War for the Planet of the Apes film, please visit FoxMovies.com and follow @ApesMovies on Twitter.