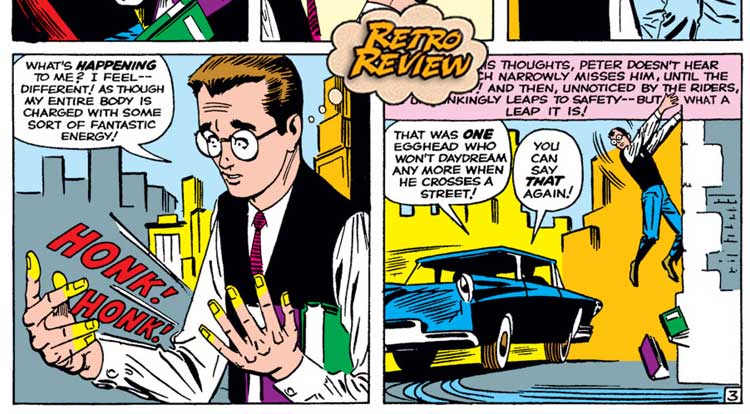 So, you guys heard the one about the bookworm, the radioactive spider and the heapin’ helpin’ of dramatic irony? Your Major Spoilers (Retro) Review of Amazing Fantasy #15 awaits! Previously in Amazing Fantasy: Though this is issue #15, there are no comics entitled Amazing Fantasy 1 through 14.  The previous issues of the book do exist, though; issues 1 through 6 were labeled ‘Amazing Adventures’, while 7 through 14 appeared under the title ‘Amazing Adult Fantasy’, which just proves how much time has passed between 1961 and 2017.  (A book with that title today would almost certainly be a pornographic endeavor.)  Those type of rapid, market-chasing changes were de rigueur for early Marvel Comics, though, as even the company itself had been renamed several times, publishing at Atlas Comics, Timely Comics and others, since their founding in 1939.  Still, there’s no way ANYONE could have foreseen what this single issue would do to the comic book industry.

We start with Peter Parker, a young high school kid who seems to have more than his share of social anxiety… Though enjoying the love and support of his elderly uncle and aunt, Peter is not popular with the other kids, and takes a lot of cruel ribbing about this general bookworm nature.  The very first image of Peter ever appears with a truly insensitive rant from other teens about his “professional wallflower” nature, setting up the expectation that Pete will always be a sad sack loser.  Still, the sting of rejection is muted somewhat by some fascinating radiation experiments at the science exhibit, one of which ends up being close enough to a spider-web to irradiate its inhabitant.  You’d think a science lab would have better environmental services…

We’ve all seen this scene half a dozen times, but look closely at that third panel: Even the grown-ups are dismissive of the scrawny young lad, making derisive comments while CLEARLY WITHIN EARSHOT OF THE CHILD THEY’RE DENIGRATING.  Buncha science jerks, anyway…  Peter steps outside to clear his head, only to stumble into the path of an oncoming car, whose driver likewise laughs at the “egghead” and tries to commit vehicular homicide to teach the poor lad a lesson.  Fortunately, Peter’s accident has given him enhanced speed and strength, allowing him to leap to safety.  Peter is a bright young man, and quickly turns his newfound abilities to his advantage… Defeating Crusher Hogan with ease, Peter earns a quick $100 (the equivalent of a little more than EIGHT HUNDRED DOLLARS as of this writing), and immediately realizes that he has a chance to pull his family out of poverty, if you can call a self-owned home in Forest Hills poverty.  He also finds a little bit of the spite that he has been receiving rubbing off on him, leaving Peter ready to show all those jerks who treated him poorly just who’s in charge now…

Peter’s genius is obvious, matched only by a sudden arrogance at being a superhuman, leading him to fashion his own flashy costume, hook up with an agent, and get booked on various television programs, showing off his fabulous agility and might.  But as either the Book Of Proverbs or Dick Van Patten will tell you, there’s something that tends to follow excessive pride, and Peter’s bill is about to come due… Let’s all be honest: If we were in Peter’s Ditko-drawn shoes, we might respond with an equally flippant and arrogant attitude.  An orphaned 98-pound weakling, treated like dirt by children and adults alike, mocked for being studious and not being rich enough to go hang out with the cool kids?  Even the moral example set by Benjamin and May Parker might start to flag under the weight of that much emotional baggage.  Unfortunately for Peter, his story is destined to be a tragic one…

Is that cop the same one from the TV studio?  I honestly don’t know (though I’ve heard people opine that this is the first appearance of George Stacy, a police captain whose daughter would make an impact on Peter’s later life, I don’t believe that to be OFFICIAL Marvel canon) but it would make for a fearful symmetry, as this time, Peter quickly responds to apprehend the criminal.  It’s the first example of a well-known Spide-Man phenomenon: When he stops quipping and joking, his is a little TERRIFYING.

He’s even scarier thanks to Steve Ditko’s use of strange, unearthly anatomy to accent his insectoid theme, giving the scrawny Parker a misshapen and terrible aspect.  (I love Ditko’s Parker, by the way, and think the costume looks both amazing and entirely home-made under his pen, something that later artists would lose in translation.)  Peter’s spider-powers allow him to enter the warehouse and bring the standoff to a halt, but then, the other shoe drops… If he had only acted in the TV studio, he might have saved the life of his beloved uncle.  I’ve read this story at least a dozen times, and seen it in the movies a dozen more, and each time I feel so much empathy for poor Peter, and not simply because he lost a father figure.  The idea that he is at fault for the actions of capricious fate and/or one schmuck with a Saturday night special is a particularly heartbreaking bit, a tiny psychological tragedy that sits at the heart of a character who is usually shown to be a happy-go-lucky jokester.  Amazing Fantasy #15 also has a couple of backup horror strips, but none of them ever get reprinted when the lead story does, and I don’t have 140 grand just lying about to get an original copy, but the strength of this iconic issue leaves it with a very respectable 4 out of 5 stars overall.  The most fascinating part of the issue for me is seeing that Smilin’ Stan and the creative team weren’t yet entirely consistent in the use of the hyphenated spelling, leading to that final caption box promising more adventures of “Spiderman!”

(Also of note for continuity buffs and games of “UM, ACTUALLY” while the words ‘with great power come great responsibility’ do appear in this book, they aren’t spoken by Uncle Ben, but are in fact used in a caption in the final panel.)

One of the classic comics of the Silver Age, with well-done Ditko art and some excellent Stan Lee melodrama...