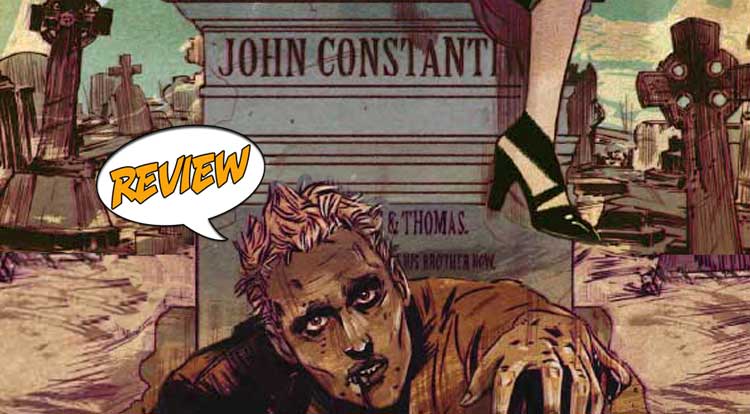 Strange things are afoot in the city of lights, but it’s okay…  Constantine has found that foot a shoe to fill.  Your Major Spoilers review of Hellblazer #11 awaits! Previously in Hellblazer: “Constantine thought about taking an old frenemy’s advice, but Paris has bistros to sit in and wine to drink.  With a little patience and a little magic, things have a way of sorting themselves out. Unless Marid crosses the finish line first, that is…”

Strange things are afoot, indeed, as a young man named Dante continues to read the stolen journal that Constantine needs, and John needs to find him as soon as possible.  To do so, he and Mercury conspire to animate the thief’s stolen shoe in the middle of Paris, using his magic to make it dance and her psychic abilities to help convince people to help it go viral.  Dante finds that the book is full of strange secrets, but more importantly, he’s not the only one who wants it, as evil sorcerer Marid and his coterie (including creepy albino twins with Moe Howard haircuts) have come looking for him.  Dante and his sister are forced to run, only to go to ground and find that the internet has gone made over his missing sneaker.  At the same time, John awaits the arrival of…  someone?  The final page of the issue seems to imply that his plan worked, but does NOT show us the identity of his visitor, making me think that other games are still afoot, and yes that’s the last time I belabor that particular joke.

MAN, WHAT A PRETTY COVER

As an old-school Hellblazer fan dating back to Swamp Thing #36, I can tell you that it’s easy to do him “wrong” as a character.  Simon Oliver’s script is less than subtle about Mercury’s powers and John’s minor sorcery, but it still works for me, partially because of his new status in the forefront of the DC Universe thanks to his run with Justice League Dark.  Davide Fabbri’s visual storytelling is excellent this issue, spending as we do most of our time in the streets of Paris and in escaping Dante’s apartment.  I’m finding the nature of the stolen journal to be a bit hazy, but that doesn’t entirely damage the story here, thanks mostly to clever dialogue and the menace created by Marid’s single-minded pursuit…

An ongoing series that’s been going on for thirty years will have its ebb and flow, but this one does well for itself by delivering a strange situation, plopping John in the middle of it all and forcing him to snark-and-magic his way out of it.  Hellblazer #11 is a strong second act for this story, and while I’m still not sure where it’s going, the journey is worth the cover price, leaving us with well-earned a 3 out of 5 stars overall.  I may be the harshest judge of Hellblazer/Constantine stories (I still have my issues with parts of Ennis’ legendary run, f’rinstance) and I’m enjoying these recent arcs of the book…