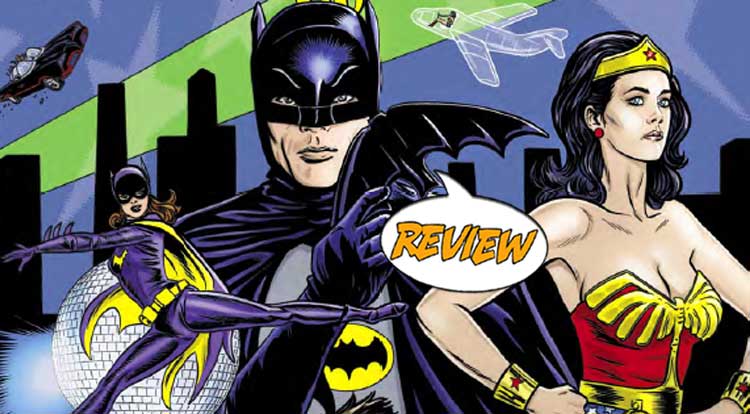 Bruce Wayne has retired from crime fighting, and the 70s have firmly taken hold in Gotham City.  But Ra’s Al Ghul cares not for the passage of years.  Fortunately, neither does a certain Amazon princess…  Your Major Spoilers review of Batman ’66 Meet Wonder Woman ’77 #6 awaits! Previously in Batman ’66 Meet Wonder Woman ’77: “Batman retired to let his protégés defend the streets of Gotham City, but his peace is threatened when an old enemy comes to town.  Will our heroes thwart Ra’s al Ghul and save the ’70s?  Tune in for the epic finale!”

NIGHTWING IS BACK IN HIS ORIGINAL COSTUME!!

This series, Faithful Spoilerites, is the best book that you’re probably not reading.  We pick up in the Batcave circa 1977, as Ra’s Al Ghul has finally discovered the truth about what lies beneath Wayne Manor.  In his search for the Lazarus Pit hidden under Gotham City, Ra’s has finally discovered the truth about his batly foe.  Elsewhere in the city, Nightwing has engaged Talia and the League Of Shadows in the club owned by a retired Catwoman, and it.  is.  GLORIOUS.  His big-collared costume has been slightly altered into a bell-bottomed leisure suit ensemble, and Talia’s goons are straight out of the Mod Squad.  Nightwing, Wonder Woman and Catwoman take out the goons and make their way to Arkham Asylum, where Talia and Ra’s are currently headquartered.  They are joined by Commissioner Barbara Gordon as Batwoman and Batman himself, arriving in a brand-new Trans Am Batmobile that he had created as a gift for his former partner…

THE 70s REFERENCES ARE GOLD

A treasure trove of references to the 70s, to Wonder Woman’s TV adventures (and at least one of her comic adventures, as there’s a reference to a battle between her and Killer Croc from ‘Wonder Woman ’77), to Batman lore and more, this is an immensely satisfying read for a nerd of a certain age.  Even if you’re not in your 40s, though, this is a strong story, playing a long game with characters whose heydays were much shorter than their cultural shadows.  Seeing a mid-40s Adam West Bruce Wayne in a state of semi-retirement is fun, but seeing him return to action for one last battle is even better, and using Ra’s to tie the decades of the tale together works perfectly.  The final panel features Wonder Woman musing on Ra’s League of Assassins, and remarking to Batman that she might have some ideas for a League of their own (which would be interesting, even if The Flash won’t be around until 1989.)

THE BOTTOM LINE: WORTH IT FOR THE TRANS-AM ALONE

Parker and Andreyko clearly enjoy this story and that joy comes through in every panel, whether it’s the Riddler leading the bad guys into battle, Robin trying to avoid his trademark puns or Catwoman’s admission that Arkham was actually quite comfortable.  Batman ’66 Meets Wonder Woman ’77 #6 is a perfect final chapter, proving that DC has finally become comfortable with the cultural perceptions of their heroes and that they can turn into that skid creatively and effectively earning 5 out of 5 stars overall.  It doesn’t have to be the only version of Batman or Wonder Woman out there, but having these iterations of the characters in play makes perfect sense in an intellectual property sense (and makes for good reading, to boot.)