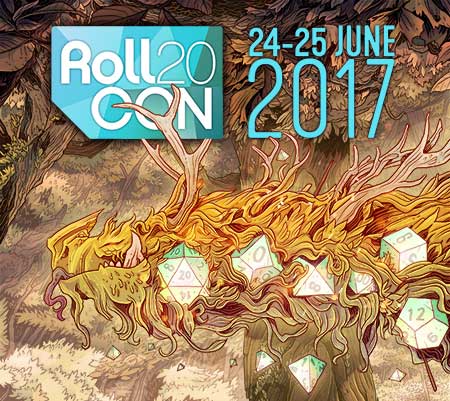 Roll20CON, which had its inaugural year in 2016, is a celebration of the 2.3 million members of the Roll20 Community. During the convention, all Roll20 users are provided with complimentary Plus-level features, including Dynamic Lighting and ad-free games, and encouraged to play as many games as they can!

Just as in 2016, Roll20 has partnered with Cybersmile, the international non-profit supporting victims of cyberbullying. Roll20 will host a Teespring campaign during the convention, proceeds from which will go directly to Cybersmile. Attendees will also be invited to make direct donations to Cybersmile throughout the convention; those that do will receive a complimentary art pack, exclusive to Roll20CON 2017, containing contributed art from popular community creators who sell their work on the Roll20 Marketplace.

As part of the anti-bullying message of Roll20CON, optional GM prompts are provided to unify the theme of the convention. The 2017 prompts are:

The community games of Roll20CON will be supplemented by two days of programmed live role-playing on twitch.tv/roll20app. Nadja “Tristarae” Otikor, Associate Programming Manager at Twitch Studios and GM on the Twitch content group Misscliks, will host the livestream. Roll20 GM-in-Residence Adam “skinnyghost” Koebel will GM the final games on both days, closing out the programmed events.

Other Game Masters who will appear on the livestream during Roll20CON are:

To learn more about Roll20CON, charity donation opportunities, and to see the full schedule of live-streamed games, go to roll20con.net!