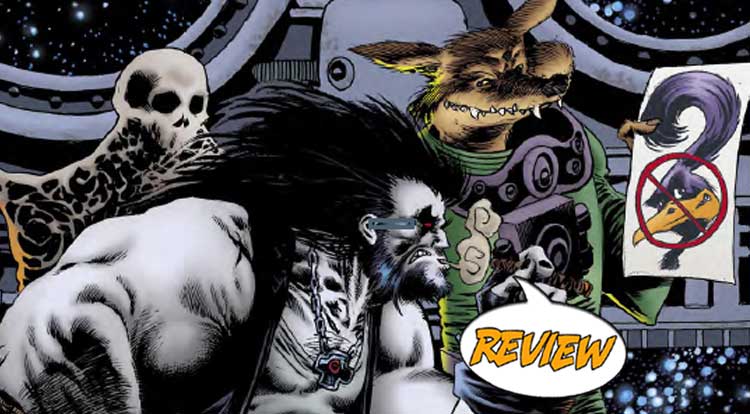 Previously in Lobo/Road Runner: “Wile E. Coyote travels to the far reaches of space to hire Lobo to hunt down and kill his greatest nemesis of all time, the Road Runner.  And when the Coyote and Lobo are after him, the Road Runner knows if they catch him – he’s through.  And the bonus Looney Tunes backup story features DC characters with story and art by Bill Morrison!”

In the year 1949, a not-entirely-humane lab captures a number of desert-dwelling creatures, experimenting on them to increase their intelligence.  (One of them is clearly Sylvester The Cat, which seems to be just a one-off joke.)  The Coyote becomes so smart that he busts himself and the other subjects out, but not so smart that he doesn’t spend the next sixty years trying in vain to capture and eat the equally enhanced Road Runner.  With the help of a sheepdog named Sam, who keeps calling him Ralph (a joke that I quite enjoyed in a meta sense), Wile. E realizes he can talk, shoots himself into space and meets Lobo, with whom he makes a deal.  The Main Man will catch the Road Runner, while The Coyote will track down his bounty in return.  Wackiness ensues, especially when Wile E. Coyote discovers that the bounty he’s tracking is Kilowog of the Green Lantern Corps,

After twenty0-odd pages of Kelley Jones art (which is truly disturbing in terms of the cartoon violence), the backup story by Bill Morrison feels like a whole new world, starting with the arrival of Bugs Bunny to remind Lobo he’s been contracted for another eight pages.  The cartoony art makes me feel like the first tales would have been better served with something similar, as the jokes feel like they actually land harder given the proper visuals.  (I will say that the final gag in the Kelley Jones portion of the book is the best jokes in the entire issue, though.)  That mismatch of art to story is by design, but it ends up combining with a plot that doesn’t quite nail down the things that make a Road Runner cartoon sing, the clever variations on the simple theme that turns it from running gag into creative genius.

THE BOTTOM LINE: A LOT OF SETUP FOR LITTLE RETURN

As with all of the Looney/DC crossovers, the handling of the mismatch is most of the fun, and I like the fact that Morrison’s script chooses to emphasize the ridiculous similarities in the different types of cartoon violence that the Coyote and Lobo engage in.  Lobo/Road Runner #1 isn’t unsuccessful, but there are enough wobbles and flaws that it ends up being a middle-of-the-road 2.5 out ot 5 stars overall, an okay reading experience that doesn’t quite stick the landing.  The many cameos and throwaway jokes are the real star in these pages…

An uneven issue which hits on the one-joke nature of the Coyote/Road Runner cartoons without quite nailing the formula that makes them fun...