Writer Steve Hendershot and Editor Tim Lapetino (Art of Atari) have been announced as the creative team behind Dynamite Entertainment’s latest offering in their Video Game Icons line, Undisputed Street Fighter: The Art and Innovation Behind the Game-Changing Series.  The 304-page stunning hardcover art book, now 30 years in the making, is set for release this November, just in time for the holiday season!

Since its inception 30 years ago, the Street Fighter™ video game series from Capcom has thrived based on a lethal combination of innovation, style and technique. From first-of-their-kind advances such as selectable characters and secret combo moves, to imagination-capturing characters such as Ryu, Chun-Li, and Akuma, Street Fighter has stayed a step ahead of the competition en route to becoming one of the most enduring and influential franchises in video game history. Undisputed Street Fighter™ features in-depth interviews and exclusive, behind-the-scenes looks into the making of the Street Fighter games, and the iconic art, design, and imagery from across the Street Fighteruniverse.
Writer Steve Hendershot says, “Street Fighter is a running, 30-year conversation between the series’ creators, players and fans. Its genius–the magic of shoulder-to-shoulder arcade play, and the playful, vivid style of its characters-stems from that back-and-forth. It’s been so much fun to hear all sides of that conversation from Tokyo and Osaka to San Francisco and Chicago, and I’m excited to tell the story through this book.”
Steve Hendershot is an award-winning Chicago journalist and the editorial director of MOVA, the Museum of Video Game Art. He is co-host and producer of the arts-and-culture podcast Cedar Cathedral, and has written for dozens of publications including Crain’s Chicago Business, SportsIllustrated.com, NBCSports.com, Chicago Magazine, Booth Newspapers, and Chicago Tribune.
Editor Tim Lapetino says, “It’s been an excellent adventure delving so deeply into the labyrinth of characters and people who make up Street Fighter Nation. We’ve drawn from 30 years of the best art and stories the franchise has to offer, and Steve has brought his fresh take to all things Street Fighterwith a ton of new interviews and insights. The book is a love letter to those who grew up with Street Fighter and also to everyone carrying it into the future.”
Tim Lapetino is the Series Editor for Dynamite’s exclusive line of books, Video Game Icons. In a series that began with the best-selling Art of Atari, Video Game Icons will delve deeply into some of the most influential and popular video game franchises in the world. Lapetino is also the author of Dynamite’s Art of Atari (as well as unannounced projects slated for 2018), as well as the Executive Director of MOVA, the Museum of Video Game Art.
Rich Young, Director of Business Development at Dynamite, says, “I still remember watching battle after battle at the local arcade on the Street Fighter II machine, amazed not only by how awesome these characters were, and how great the game looked and played, but also how good the players were, and the amount of effort they put into winning each match. Street Fighter helped pave the way for the fighting game genre… and it’s still going very strong today. I’m thrilled to be working with Capcom on this book, and the same amazing team that put together Art of Atari!” 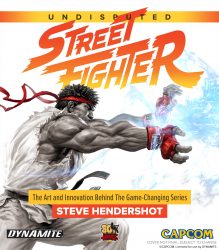 Undisputed Street Fighter™ (ISBN 978-1-5241-0466-5) will be available at major bookstore chains, online booksellers, and independent bookstores courtesy of Diamond Book Distributors, and to consumers through the comic book specialty market. Undisputed Street Fighter™ will be solicited in Diamond Comic Distributors’ July 2017 Previews catalog, the premier source of merchandise for the comic book specialty market, and slated for release in November.  Undisputed Street Fighter will also be available for purchase through digital platforms courtesy of Comixology, Dynamite Digital, iVerse, and Dark Horse Digital. Fans and retailers are encouraged to follow Dynamite Entertainment and Capcom’s official social media channel for the latest updates regarding creative teams and release dates.
About Dynamite Entertainment:
Dynamite was founded in 2004 and is home to several best-selling comic book titles and properties, including The Boys, The Shadow, Red Sonja, Warlord of Mars, Bionic Man, A Game of Thrones, and more.  Dynamite owns and controls an extensive library with over 3,000 characters (which includes the Harris Comics and Chaos Comics properties), such as Vampirella, Pantha, Evil Ernie, Smiley the Psychotic Button, Chastity, and Peter Cannon: Thunderbolt.  In addition to their critically-acclaimed titles and bestselling comics, Dynamite works with some of the most high-profile creators in comics and entertainment, including Kevin Smith, Alex Ross, Neil Gaiman, Andy Diggle, John Cassaday, Garth Ennis, Jae Lee, Marc Guggenheim, Mike Carey, Jim Krueger, Greg Pak, Brett Matthews, Matt Wagner, Gail Simone, Steve Niles, James Robinson, and a host of up-and-coming new talent.  Dynamite is consistently ranked in the upper tiers of comic book publishers and several of their titles – including Alex Ross and Jim Krueger’s Project Superpowers – have debuted in the Top Ten lists produced by Diamond Comics Distributors.  In 2005, Diamond awarded the company a GEM award for Best New Publisher and another GEM in 2006 for Comics Publisher of the Year (under 5%) and again in 2011.  The company has also been nominated for and won several industry awards, including the prestigious Harvey and Eisner Awards.
via Dynamite Entertainment
books Dynamite Entertainment Press Release Solicitations Steve Hendershot Tim Lapetino
Share. Twitter Facebook Pinterest LinkedIn Tumblr Email
Previous Article[FREE COMICS] Halloween ComicFest 2017 comic books announced
Next Article Major Spoilers Staff Picks for June 21, 2017 #NCBD