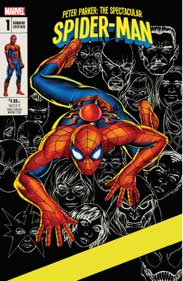 [Auction] Exclusive version of Peter Parker: The Spectacular Spider-Man to be sold on eBay In February, Marvel announced a new Spider-Man comic book series — Peter Parker: The Spectacular Spider-Man — created by writer Chip Zdarsky and artist Adam Kubert. Calling back to the early Amazing Spider-Man comic books, the series tells the story of high schooler Peter Parker going back to fight crime in his New York City neighborhood. To celebrate the launch of this highly-anticipated series, a special variant cover edition issue #1 will be sold exclusively on eBay beginning June 21st at 8am Pacific. Visit: www.ebay.com/spiderman

The variant cover features a unique cover design created in partnership between Marvel, eBay and eBay seller My Comic Shop, who commissioned artist John Cassaday to bring the idea to life. An homage to an Amazing Spider-Man cover from the early 1970’s, this new limited special variant edition will be available on eBay for $5.99 with free shipping—and just 3,000 copies are being produced.

“With [Peter Parker: The Spectacular Spider-Man] we’re using the same Spider-Man continuity, but shifting the spotlight back to his NYC environment and supporting cast,” says series writer Chip Zdarsky speaking with Entertainment Weekly. “But even though we’re pushing to make it a more personal book, we’re still going to have big adventures with ramifications that’ll be felt in other books. If I had a true mission statement for the book it would be: ‘Have fun, have heart, have stakes.’”

One of the most valuable Spider-Man comic books ever sold on eBay was a copy of Amazing Spider-Man #1 CGC NM+ 9.6 (1963), which sold for $110,100 in 2004.* There are currently more than 280,000 live listings on eBay for Spider-Man related merchandise, spanning comic books, action figures, clothing, video games, toys and more—comic books and toys are the best-selling categories of Spider-Man items.*

“Spider-Man is an iconic Marvel superhero that’s been popular with every generation ever since he first appeared on the comic book pages in 1962,” said Sam Bright, Senior Director of Art & Collectibles at eBay “This has been an incredible experience to collaborate with one of our top comic book sellers to exclusively offer a piece of super hero history to our global eBay community of 169 million active buyers. With this unique item, we’re helping connect our shoppers to this one-of-a-kind item that you can’t find anywhere else in the world. ”

Now, in the month leading up to the box office premiere of Spider-Man: Homecoming on July 7th, sales for Spider-Man merchandise on eBay have more than doubled.** And this year alone, Spider-Man related items have been searched for on eBay over 4,300 times a day on average.* The franchise continues to perform well on eBay.

eBay Spider-Man By The Numbers