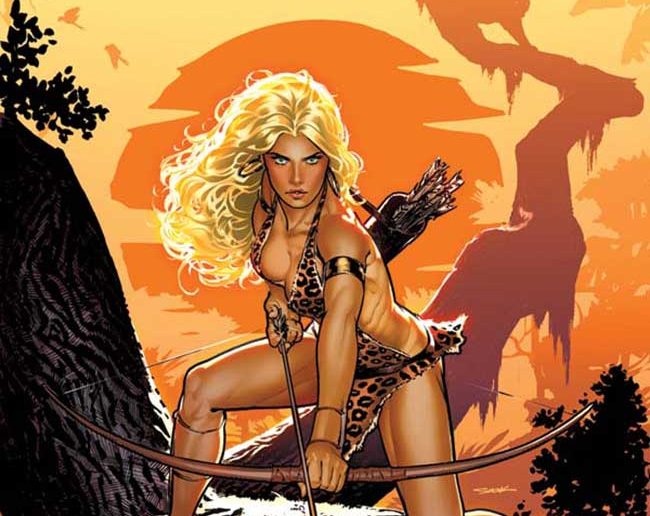 Thanks to the overwhelming success of Dynamite Entertainment’s Sheena #0, the Queen of the Jungle’s latest relaunch, issue #1 is set to launch September 6th, and features a wide-swath of fantastic artwork by industry legends, including artist J. Scott Campbell!

Writer Marguerite Bennett says, “Our story is glorious golden age pulp — high adventure, quick wit, ancient mysteries, and daring dames — clashing with the perils of two worlds: one, the modern world come to conquer, and one, a world of dark supernatural mystery long forgotten, awoken to anger once more. This is a fast paced, action packed kick off to more exciting adventures for Sheena!”

Christina Trujillo adds, “Sheena is strong, brave, and willing to bend the rules in order to do her duty and keep her home safe. I think fans will enjoy having Sheena as a guide while they unravel the mysteries of the forest.”

A former student of Scott Snyder (Batman), Trujillo received an MFA in Creative Writing from Sarah Lawrence College in 2013, has seen her works published in the literary journal Dark Phrases, and was a finalist for Galaxy Press’s Writers of the Future award.

“We are incredibly proud of this series, and fans have clearly shown their excitement based on the strength of pre-orders for issue #0,” says Dynamite CEO and Publisher Nick Barrucci.  “The lush universe Moritat has brought to the page is complemented by the extraordinary cover art by some the greatest talents in the business. I can say with great certainty that J. Scott Campbell has once again crafted a breath-taking character that every collector is going to want to put on display!” 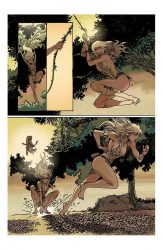 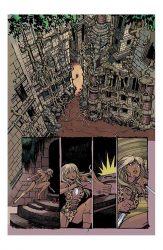 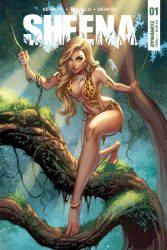 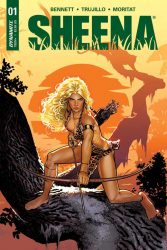 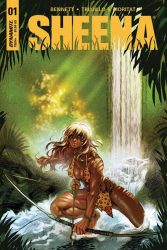 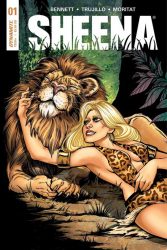 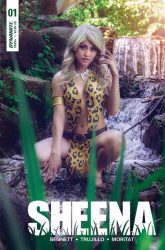 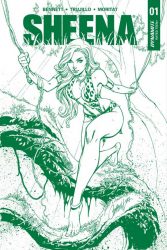 Dynamite was founded in 2004 and is home to several best-selling comic book titles and properties, including The Boys, The Shadow, Red Sonja, Warlord of Mars, Bionic Man, A Game of Thrones, and more.  Dynamite owns and controls an extensive library with over 3,000 characters (which includes the Harris Comics and Chaos Comics properties), such as Vampirella, Pantha, Evil Ernie, Smiley the Psychotic Button, Chastity, and Peter Cannon: Thunderbolt.  In addition to their critically-acclaimed titles and bestselling comics, Dynamite works with some of the most high profile creators in comics and entertainment, including Kevin Smith, Alex Ross, Neil Gaiman, Andy Diggle, John Cassaday, Garth Ennis, Jae Lee, Marc Guggenheim, Mike Carey, Jim Krueger, Greg Pak, Brett Matthews, Matt Wagner, Gail Simone, Steve Niles, James Robinson, and a host of up-and-coming new talent.  Dynamite is consistently ranked in the upper tiers of comic book publishers and several of their titles – including Alex Ross and Jim Krueger’s Project Superpowers – have debuted in the Top Ten lists produced by Diamond Comics Distributors.  In 2005, Diamond awarded the company a GEM award for Best New Publisher and another GEM in 2006 for Comics Publisher of the Year (under 5%) and again in 2011.  The company has also been nominated for and won several industry awards, including the prestigious Harvey and Eisner Awards.
via Dynamite Entertainment
Dynamite Entertainment j scott campbell Marguerite Bennett Press Release Ryan Sook Sheena Solicitations
Share. Twitter Facebook Pinterest LinkedIn Tumblr Email
Previous Article[Movies] Batman and Harley Quinn to debut at SDCC’17
Next Article [Anime] VIZ Media releases Sailor Moon S part 2 today