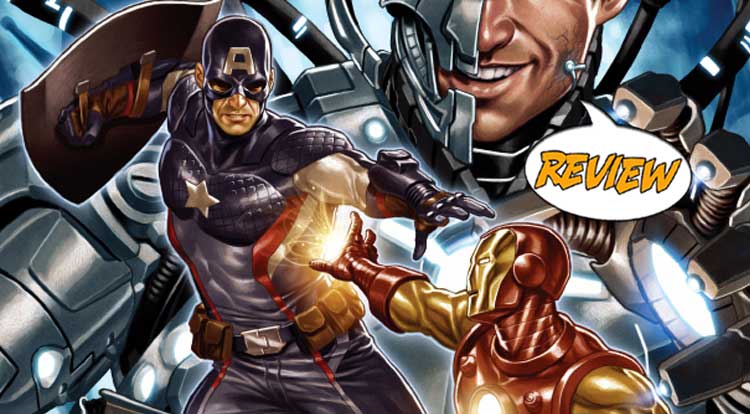 The heroes of the Marvel Universe have discovered that the Cosmic Cube is behind Captain America’s change of heart, but can they reassemble it before he can destroy all the shards?  Your Major Spoilers review of Secret Empire #4 awaits! Previously in Secret Empire: “Steve Rogers AKA Captain America, has claimed the United States for Hydra.  The handful of heroes who escaped his initial attack discovered that a Cosmic Cube was behind Steve Rogers’ sinister change of heart and might be able to change him back — if the scattered pieces could be reunited.  Tony Stark and his team convinced Sam Wilson to smuggle them out of the country, but their destination was more dangerous than he let on.  Captain America is after the cube as well, and to get the first shard, both factions will have to tangle with Ultron himself.  Meanwhile, Black Widow and her group of younger heroes are closing in on a less merciful way to deal with Captain America…”

ANYBODY ELSE READ ‘CONTEST OF CHAMPIONS’?

This issue opens with a prelude featuring bearded Steve Rogers wandering in the forest, only to be attacked by The Living Laser, The Whirlwind and Batroc The Leaper.  His battle is joined by two men who resemble Sam Wilson and Bucky Barnes, leading all three men to wander away again and making me strongly believe we’re seeing the real Steve Rogers’ mind trying to escape from the reprogramming of the Cosmic Cube.  Cut to our main story, where our heroes’ struggles have turned from fighting against a friend turned evil to a “gather the recipe” side quest for the bits of the broken maguffin.  Also, The Black Widow tortures and kills a Hydra agent while her young charges watch in horror, a moment that is there to set the high stakes, but kind of falls flat for me.  Meanwhile, the Avengers Resistance are forced to confront Ultron to find a missing Cube shard.  Both the resistance team and Captain America’s Jackbooted Avengers end up in the clutches of Ultron (who you may not remember is now a terrible hybrid monster of robot and Hank Pym) who forces them to sit through an awkward “family dinner” where Hank Pym, Tony Stark and Steve Rogers make ham-fisted ‘The Reason You Suck’ speeches at one another.  Scott Lang’s intervention convinces Ultron/Hank to give the Resistance team the shard, but they quickly discover that Captain America sent Namor out to retrieve another shard, leaving them once again at a deadlock.

A LOT OF SPEECHIFYING IN HERE

This review is not the place to litigate the existence of the Big Crossover Event, and my questions about the viability of the Event-To-Event nature of modern superhero publishing are well documented, but regardless of any of that?  This is not a good issue.  Spencer doesn’t give us meaningful transitions between the various story tracks, which is especially infuriating with the “Is It All A Dream?” introduction, and much of the issue is devoted to moments designed to shock readers: Black Widow’s murder, Tony Stark suddenly calling out Hank Pym as the reason for literally all the Avengers problems, and especially a puzzling bit with The Punisher make for a fragmented reading experience.  Leinil Yu’s art doesn’t make anything clearer, providing sketchy, seemingly unfinished art that is sometimes impossible to figure out (Ultron’s hybrid face is particularly difficult to parse from panel to panel.)  A last-page reveal that something is even more wrong than we think falls flat, mostly because things are already utterly terrible, and the character portrayals in this comic make it hard to root for either side.

To make a long story short, whether or not the basic premise of this book makes is difficult to engage with, this issue is actively unpleasant to read both in terms of story and art, leaving Secret Empire #4 with a disappointed 2 out of 5 stars overall.  There are a lot of things in the issue that have potential to work, but the creative team never manages to put them together into something that exciting to read.

A disjointed issue full of shouting and speeches, with too many players in motion and unclear art. Best to stay clear til it all blows over...