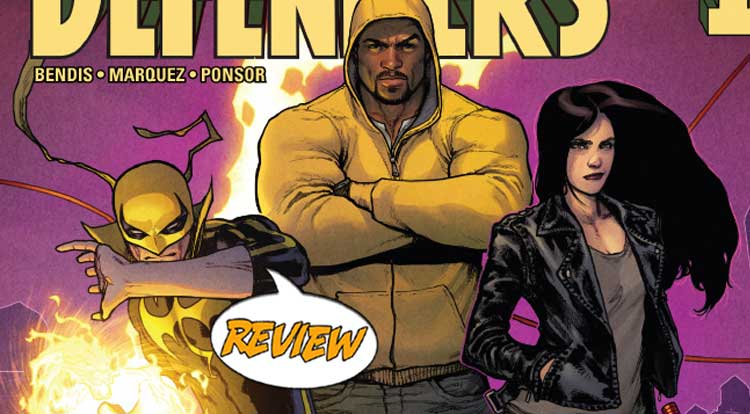 The Heroes For Hire are in the sights of Luke oldest foe, Diamondback.  But somebody has upped his game after years of being “dead”…  Your Major Spoilers review of Defenders #1 awaits! Previously in Defenders: “Diamondback’s back — and Luke Cage, Daredevil and Iron Fist unknowingly declared war on him by busting up one of his establishments.  Diamondback took revenge, shooting Luke’s wife Jessica Jones and launching vicious attacks on Luke and his allies.

But he just picked a fight with the wrong vigilantes…

We open this issue with a three-page sequence introducing Diamondback, who is clearly meant to be a multi-layered character, taking down a skeevy drug dealer who has been peddling fake IGH on the streets of New York.  It’s unclear whether the subsequent murder comes from poisoning people with fake drugs or just horning in on Diamondback’s own territory, but nonetheless, it establishes D-back as a force to reckon with.  Cut to Luke Cage, coming home to a brutal attack on his family and his business.  He escapes successfully, but gets a phone call to tell him that his wife, Jessica, is in the hospital, having been shot.  Daredevil and Iron Fit likewise arrive after escaping their assassination attempts, and I’m suddenly a little bit irritated that only the female character got successfully bushwhacked by the villain.  That quickly goes away, as Jessica exits her hospital bed, and all four heroes set off to track down Diamondback.  The last third of the issue is at once the most intriguing and the most infuriating part, as Diamondback is approached by The Black Cat about he moves he’s been making in the criminal underworld.  As one of the reigning crime lords, Cat is impressed by his boldness, but reminds him that he has made an enemy of the indestructible Power Man, who suddenly busts in…

…only to have Diamondback literally beat him to a pulp.

The biggest problem with this issue for me is the fact that I’ve been reading Power Man and Iron Fist, I’ve been reading Jessica Jones, I’ve been reading Luke’s solo book, and the story presented here doesn’t really gibe with the context of any of those books.  That said, it’s a fun story, and the character reveals feel very movie-like (especially with the character logos and Suicide Squad-style cut-ins when each new hero enters the story.  As with any Brian Bendis story, the gems lie in the character interactions, such as an enraged doctor rushing into Jessica’s room only to face all four Defenders, backing away stammering.  Diamondback is well-rendered here, with ambiguity about whether he’s really entirely evil providing a nice contrast to his later super-powered reveal, and there is a laugh out loud moment as Luke, Danny and Daredevil smash their way around the city busting things up to get information, while Jessica quietly and politely does her P.I. schtick…

On the one hand, I would have like to have had more of the setup actually shown in these pages (the opening pages of the issue feel like I missed a zero issue or a springboard from one of the other books, but I can’t find it), and the plotting is traditionally loose in the Bendis style, but it all comes together reasonably well.  Defenders #1 features lovely art by Marquez, likeable characters and a villain who raises the stakes admirably, making for a successful first issue read and 4 out of 5 stars overall.  If Marvel commits to this iteration and the Netflix show is a hit, we may see the most extended Defenders run since some time in the late 1980s, and as far as I’m concerned, that’s a win for everyone…

Straddling the fine line between TV adaptation and ongoing comic narrative, with some cute character work, but a few odd moments where I can't figure out the "when" of it all...