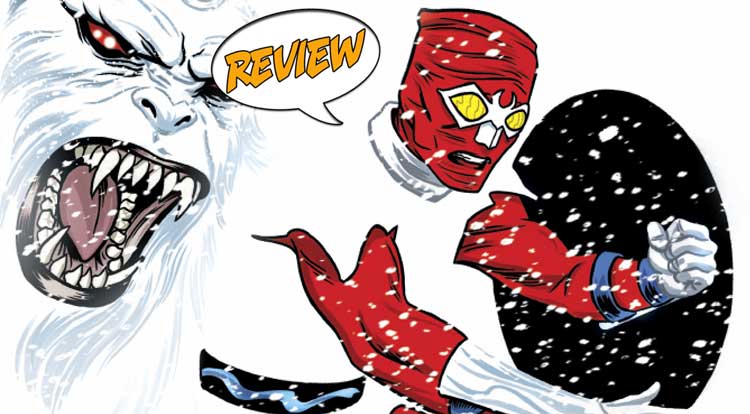 Bug! The Adventures Of Forager #2 (of 6) Review

Last time, Bug fell afoul of the evil General Electric, throwing him through time to World War II, where he encounters several heroes of DC Comics past…  Your Major Spoilers review of Bug! The Adventures Of Forager #2 awaits! BUG! THE ADVENTURES OF FORAGER #2

Previously in Bug! The Adventures Of Forager: “Bug’s tumble through dimensions ends up taking him back in time, to the start of General Electric’s mad scheme.  In the remote Himalayas, the mad scientist leads his robot army in search of a precious magical metal.  Sandman, Sandy, Blue Beetle and the Losers are already out in the snow looking to stop him, but only Bug knows that the fate of the multiverse hangs in the balance…”

Sent back to the trenches of WWII, Bug has to think quickly to avoid death, turning his trusty shield into a snowboard in a really lovely visual sequence, after which he encounters a special unit consisting of The Losers, The Blue Beetle, The Sandman and Sandy The Golden Boy.  Sandy mistakes Bug for The Red Bee, thanks to his insect motif and crimson togs, but no one really believes his stories about being from the future until they’re all engaged in battle by General Electric’s robots.  Sandy and Bug sneak in to find out more, only to end up with Bug being the reason General Electric gets his robot brain, as seen last issue, while the heroes earn the gratitude of the goddess of Nanda Parbat.  (Interestingly, the two soldiers who receive her grace seem to be the forebears of O.M.A.C. and Deadman, which makes part of last issue’s strange cameos make a big more sense.)  As the issue ends, Bug has recovered the missing girl and talking teddy bear that led him into the past, closed a stochastic time loop and has leapt once again to another place/time with her…

THE RED BEE GAG WAS FUN

I’m a sucker for anything drawn by Mike Allred, but this issue is fun from top to bottom, from the 40s heroes’ disbelief at Bug’s stories of how he got there to the clever dialogue to the sight of Sandman and Beetle attacking with a herd of yetis.  Allred’s art is lively and fun throughout, the story is full of mysteries that bear just enough fruit to keep you interested, and the eclectic guest-cast is fun.  (I can’t remember having seen The Losers in action since The Crisis On Infinite Earths, so their appearance is particularly weird and fun.)  Even though the issue races through its plot, it feels like a natural narrative urgency rather than trying to cram too much into one issue, which is really impressive work on the part of the creative team.

In short, Bug! The Adventures Of Forager #2 is the kind of comic book that makes you sad it’s only a limited series, featuring excellent art, a fun story and a ton of entertaining doodads and nabobs and such, earning a truly impressive 5 out of 5 stars overall.  When the Allreds collaborate, you really should check out the work, as it’s often exciting, exuberant, must-read comic book action.

BUG! ADVENTURES OF THE FORAGER #2

An excellent issue, graphically explosive with a fun story and a genuine sense of plot urgency. Plus: Golden Age Blue Beetle!