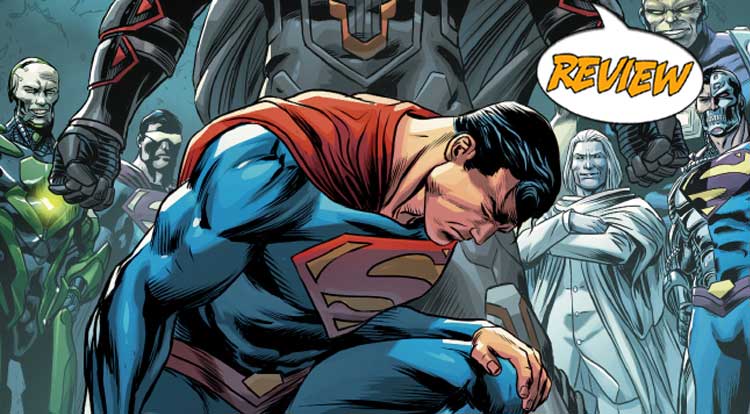 His worst foes stand allied before him.  Can Superman save Task Force X?  Can he even save himself?  Your Major Spoilers review of Action Comics #981 awaits! Previously in Action Comics: “Superman races to save the Suicide Squad from General Zod, Cyborg Superman and Eradicator.  Can the Man of Steel escape the Black Vault and stop the carnage before Harley, Deadshot and the rest of Task Force X are forced to make a final stand?”

“KNEEL BEFORE ZOD, SON OF JOR-EL!”

The first page of this issue is one of the most horrible things I’ve seen in Superman’s life in a while: Surrounded by the decaying bodies of his friends and family, he struggles to reject their claims that he is responsible for their deaths.  His parents, son, wife and birth parents all harangue him until things literally explode, revealing that Superman is trapped inside the Black Vault at Belle Reve prison.  Amanda Waller is stunned to see Superman in her prison, as she though that it contained General Zod.

Speaking of Zod, he has teamed up with Hank Henshaw, Cyborg Superman, and the Eradicator, last splinter of dead Krypton, creating a triad of monsters even more powerful than Superman himself.  Things get heavy quickly, as Henshaw convinces Zod to ally with them, temporarily, and their combined might proves more than even Superman can handle in a really well-rendered all-out battle, ending with Superman retreating, remarking that the sound of Henshaw’s cybernetics will allow him to find them easily.  Why would that matter?  Because the Black Vault has rendered him blind…

Jack Herbert’s art is phenomenal, combining Jurgen’s clear line work with the more detailed inking of a Jim Lee or Adam Kubert, and his brief rendition of Supergirl in these pages makes me want to see his take on her.  Most importantly, Herbert’s art helps to mask the fact that all of this feels very familiar to someone who has been reading Superman books since the early 1980s.  The use of Henshaw and Eradicator calls to mind ‘Reign Of The Supermen’, while this issue’s Amanda Waller plot and dialogue are clearly influenced by the Academy Award Winning ‘Suicide Squad’ film (and not just in the obvious ways.)  The last page reveal, though, is masterfully set up and executed with great subtlety, and it leaves me wondering what happens next.  Also lovely: When Superman’s titanic battle makes the news, we see the supporting cast members, including Luthor, Lois, New Super-Man and others, responding to the massive threat, a nice touch that reminds us of the best parts of a shared universe narrative.

THE BOTTOM LINE: THAT LAST PAGE, THOUGH…

Though bits of the plot are familiar, their assembly here works to great effect, leaving Action Comics #981 an effective and engaging read with excellent art on every page, earning a well-deserved 4 out of 5 stars overall.  It can be hard to write Superman, but this creative team is clearly up to the challenge of doing the Man Of Steel justice, especially Jack Herbert, from whom I expect great things.  As we build to issue #1000, I hope to see a story that really makes for a killer anniversary…

Jurgens' story feels like a melange of things we've seen before, but Zod is terrifying and the art is stellar...