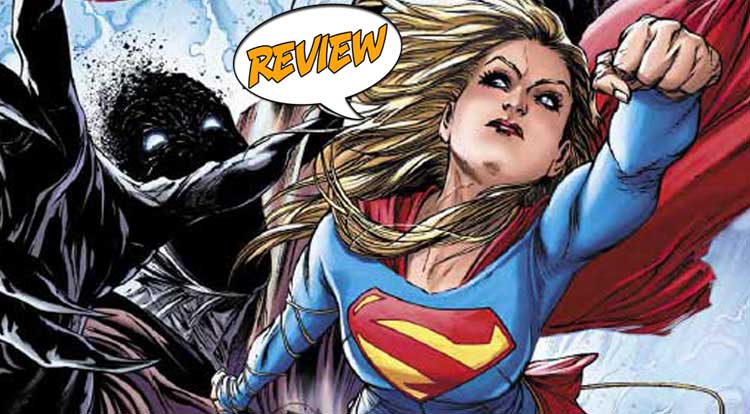 Trapped in the Phantom Zone, powerless, can even the mighty Supergirl escape the evil Phantom King?  Your Major Spoilers review of Supergirl #10 awaits! Previously in Supergirl: “The Phantom King holds all the cards, and he’s forcing Supergirl and Batgirl to turn to the alien antagonist in order to save themselves and the humans trapped inside the Phantom Zone…”

This issue picks up where last ish left off, with Supergirl, Batgirl and Ben trapped in The Phantom Zone after getting caught in a portal by accident.  The Zone has deprived Kara of her powers, but they’re fortunately picked up by a pirate ship commanded by Captain Jiln-Ka, a ship built out of the only solid material in the Zone.  It’s not long, though, before the Captain reveals that he’s more than he seems to be, and is in fact an old enemy of the House Of El.  He is also the being who has been manipulating Psi (the psychic whose escape into the zone in the Supergirl Annual kicked off this whole arc), and is holding her hostage on his ship.  Supergirl is forced to rely on her wits and unpowered fists, like Batgirl, leading to the final page cliffhanger where she makes a daring leap into the mouth of a mighty psychic dragon that may or may not be Psi herself…

HE WANTS TO *BOIL* BATGIRL?

Of course, the most interesting part of the issue to me is the return of Selena, the witch played by Faye Dunaway in the 1984 ‘Supergirl’ film, who is fetched from Limbo by a team consisting of Magog (Ugh), The Emerald Empress and Indigo, aka Brainiac-8.  It’s the kind of continuity fan service that I love from the work of Steve Orlando, bringing Supergirl’s highest-profile foe (at least, her highest profile pre-TV foe) into the DCU proper for the first time, and tying it all together with the ongoing mystery of the Empress, who seems to be a relic of the pre-Flashpoint universe.  The art is charming as well, giving us a Kara Zor-El (and a Batgirl, for that matter) who actually looks like a young woman and there’s a lot of emotion in every facial expression Brian Ching draws, especially Ben’s horrified expression on the final page…

So often, when we’re in the middle of an ongoing storyline, I am frustrated by the obvious stretching necessary to fill out a story (I’m looking at you, Secret Wars 2016) but there’s none of that here.  Supergirl’s story moves quickly, while still allowing for some quieter character moments for our cast in between the shock and the big fight sequences.  Supergirl #10 makes for a great second act, building to something that could be catastrophic without neglecting to tell a character-driven story, earning 4 out of 5 stars overall.

Cleverly written, well-drawn and excellently paced, it's an exciting adventure through the Phantom Zone with a shocking final page...