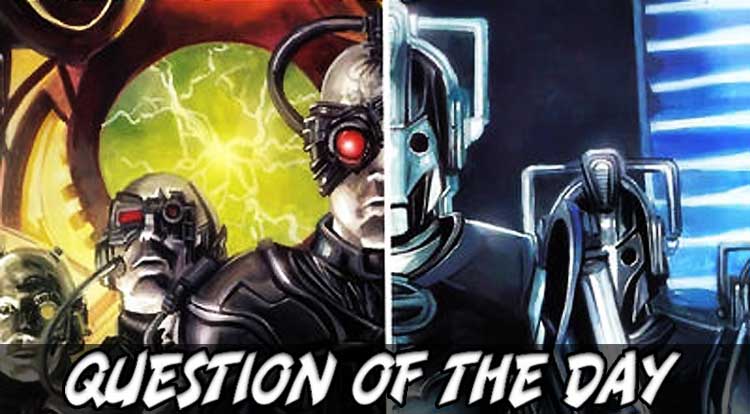 Dating back to 1966 (in our world, anyway) The Cybermen hailed from Earth’s twin planet, Mondas, which was knocked out of orbit and sent spinning through space.  Replacing their bodies part by part with machinery, the Mondasian people slowly became an terrifying cyborg army traveling through space, so dangerous that they are the first menace to so thoroughly menace The Doctor as to trigger his regeneration.

Dating back to 1989, The Borg collective has a stated goal of perfection, assimilating planets and species and stealing that which makes each world and each people unique and making it part of their faceless phalanx of infectious warriors.  Their threat is so great that they nearly made legendary Starfleet Captain Jean-Luc Picard a permanent part of their cyborg army, and once took over the entire Earth retroactively.

The MS-QOTD (pronounced, as always, “misquoted”) finds either group equally horrific, especially given their different-but-still-awful methods of transformation, asking: Which group makes for the more terrifying cyborg army: The Cybermen or The Borg?