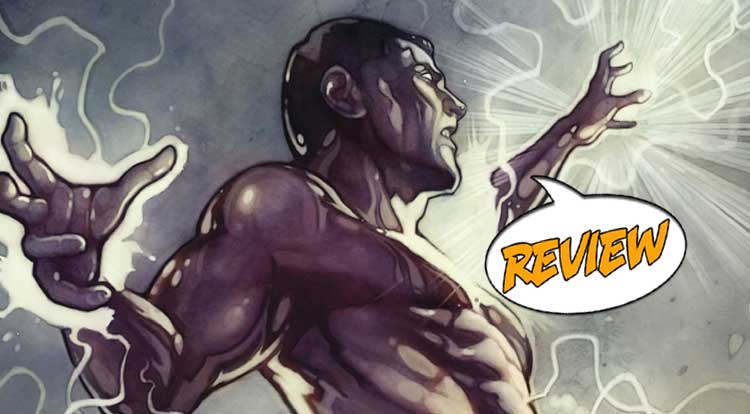 The Fall And Rise Of Captain Atom #6 (of 6) Review

Captain Atom has to protect General Eiling from the killer called Thrane, even though he kinda wants to kill Eiling himself…  Your Major Spoilers review of The Fall And Rise Of Captain Atom #6 awaits! THE FALL AND RISE OF CAPTAIN ATOM #6

Previously in The Fall And Rise Of Captain Atom: “After past and present events collide in a crisis for Captain Atom and General Eiling, longtime adversaries are forced to team up.  But even though they seem to be on the same side for once, their motives could not be further apart.”

THE THREAT OF ULTRAMAX!

After a weird and alienating relaunch in the new 52, Captain Atom is back and under the pen of his creator (or at least the creator of the first DC version of the character from the ’80s, since there are probably half a dozen takes on Cap), Cary Bates.  This issue brings the first arc to a close, as Captain Atom (who is now red, or at least possible red, as the coloring in this issue is murky and all over the place) confronts Ultramax, a former serial killer, empowered with the same Quantum forces as Cap himself.  (Ultramax/Thrane feels like a retread of Major Force, but since Major Force sucks, I’m not particularly upset.)  Though Eiling has manipulated him, Captain Atom fights to keep him safe, all the while trying to figure out how to let his son, Genji, know that he’s alive once again.  As this issue wraps up, the threat is stopped, the government whistle-blower is revealed to be someone very close to Eiling, and Genji may have quantum powers of his own.

Oh, and the return of Captain Atom has attracted the attention of the Justice League Of America…

Will Conrad’s art is interesting, and his storytelling and construction are top-notch, but his art is ill-served by the coloring job in these pages, making some of the story unclear.  The Quantum powers of the hero and villain are rendered as lighting effects, making things even more hard to follow.  The story itself is pretty solid, and feels like it should be the first arc of an ongoing series, rather than a six-issue limited.  I like the idea of returning Captain Atom to prominence, and while I’m fine with changing the characters’ look and coloring, I’d prefer that I was actually sure that they’ve done that, something that this issue doesn’t clearly convey to me.  I’m definitely interested in seeing more of Bates’ Cap in action, and the promised showdown with the League is something I’m interesting in reading.

This issue feels unusual to me, in that is has old-school plotting, leaving many hooks for more Captain Atom tales in the future, something that many modern books have given up in favor of clean six-issue trade-ready arcs.  The Fall And Rise Of Captain Atom #6 is a solid final act, with strong art and story marred by an unpleasant coloring job, leaving me with mixed feelings and the issue with 3 out of 5 stars overall.  I’d love to see more of this Cap and hope that these threads get picked up, whether in another mini or the pages of the Justice League…

THE FALL AND RISE OF CAPTAIN ATOM #6

Solid story, solid dialogue, decent art, all brought down by sub-par coloring. I'd love to read more of this Captain Atom, though...