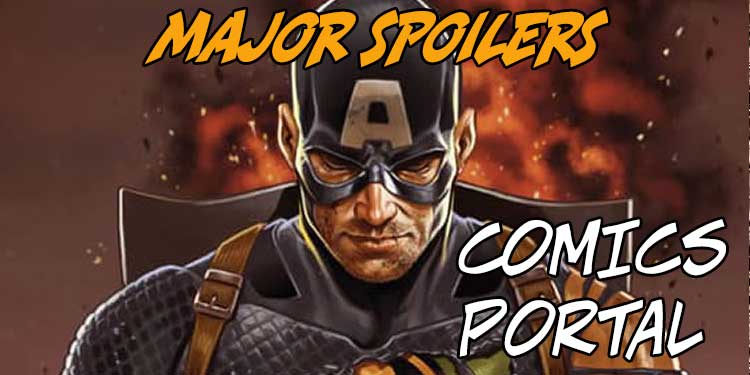 COMICS PORTAL: Should Captain America Get ‘A Rest?’

After Secret Wars II, The Fantastic Four were given ‘a rest’ from monthly publication. After decades of being printed by Marvel, the group – well, at least Mr. Fantastic and his son, primarily, haven’t appeared in the comics from the House of Ideas for about a year now.

Sadly, I think it’s time to give Captain America that same kind of ‘rest’ – at least, until someone can come up with an idea he can flourish under.

NOT THE TIME FOR CAP To be real, Captain America came to be in during a time of war, when the people of the country needed a symbol to rally around.

He was someone that people could look up to, someone who would inspire patriotism.

I can’t see Cap as that kind of character these days. In fact, he hasn’t been that way for a long, long time.

People these days can’t agree if we are at war or not. Cap’s a much better character when the answer is a clear “Yes!”

Over the years, as I’ve read Cap’s adventures, he hasn’t always been a symbol for America. He’s often been discouraged with the country, and then he has even taken off the costume and the shield, donning new identities such as “Nomad” and others without a country to represent.

And I’m not really convinced that Sam Wilson should be Captain America, either. I guess I LIKED the Falcon a lot, and I’d still like to see him get his own comic or even his own team!

If you’ve read my columns the last few years, you’ll know I feel that putting a person of color into an existing heroic identity is something of a cheat. I mean, I realize it’s easier than trying to build a world around someone, but I think there’s so much richness in these characters that’s being ignored. What’s always been fun about Cap to me is that, much like Batman, he takes on villains and groups of villains who challenge him. I’ll never forget the time Cap had to battle “Sleeper” robots that had been buried in Germany by Hydra (I think), and it took everything he had to knock them out of commission.

Now, Cap is less of a leader and more of a wanderer. I get that before the next time the character appears in a Marvel Studios movie, the guy in the comic will be back to “normal,” but why go through this so much?

I must still be smarting from the “death” of Cap not that long ago. He “apparently” was killed, and the Winter Soldier took over his identity, even toting a gun. After the big press hoopla and all about his passing, it turned out he had just been knocked out and stashed away, if I remember my Cap killing’s correctly.

LET HIM REST IN PEACE

I always like to say that if you’re making fundamental changes to a character, you either need to create a new one or stop writing this classic one! If you don’t, someone else will come along with an idea that people will like better!

Again, as Marvel did with the Fantastic Four, I’d say it’s time to give Cap some well-deserved time off. It doesn’t have to be forever. It could be just a few years until the world is a place he more easily fits in or someone comes up with a new idea or two to make Cap vital again!

Look, I can’t even begin to talk about what’s been going on in Secret Empire or in the recent Cap books. I just think that if you must turn Cap into Hydra, well, that’s about as low as Marvel can go currently. And don’t replace him with Bucky Barnes or Sam Wilson or anyone else. Please.

Do us all a favor, why don’t you, and end Secret Empire with Cap vanishing from the Marvel landscape, okay? It just doesn’t feel like the House of Idea has the slightest idea what to do with the First Avenger. So don’t do anything with him! Let us remember Cap as that classic HERO who we could look up to and truly miss!

What do you think? Should Cap keep going after Secret Empire? Or should he take time off, much like the Fantastic Four? Please be sure to share your thoughts below!