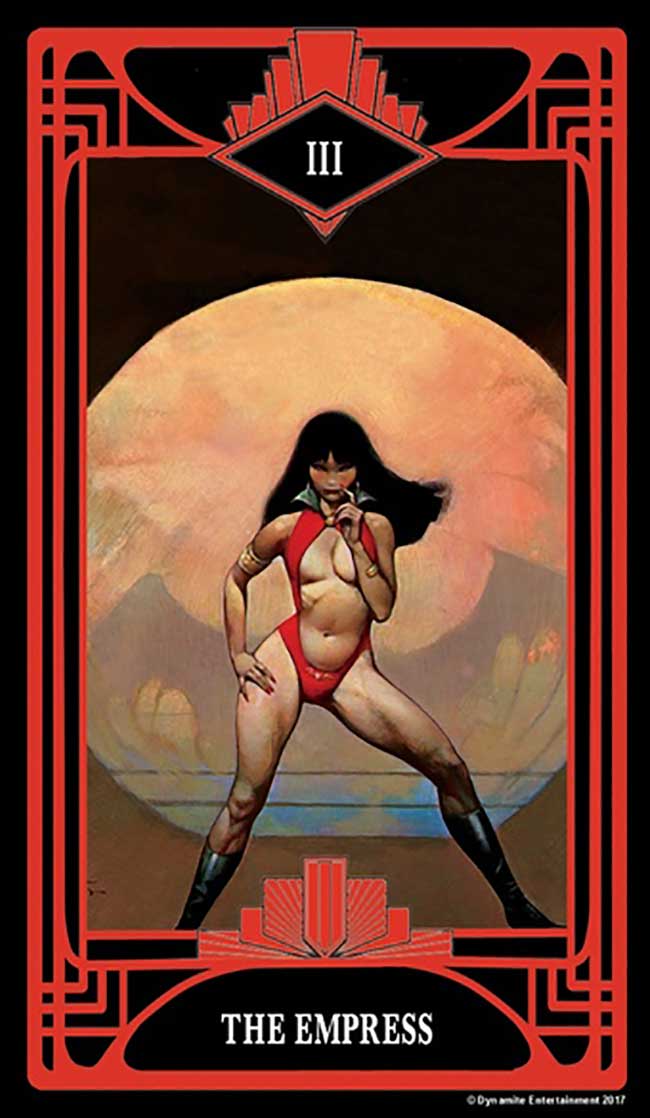 Dynamite Entertainment is pleased to announce the launch of their exciting new Kickstarter crowdfunding campaign, which will celebrate the vibrant history of their signature character Vampirella with a stylish and functional Tarot Card Deck!

Expected to ship in October, this first-ever collectible game from Dynamite captures the vivid artwork and spirit of the iconic Vampirella in a 78-card art deco inspired deck that embraces the vintage look encapsulated in the classic Vampirella Magazine covers.

The Vampirella Tarot Deck Kickstarter campaign will run between today, May 31st, and the morning of June 15th, can be found by visiting:

Vampirella, one of the most recognizable comic book characters ever published, was created in 1969 and has thrived for close to five decades, consistently delivering classic tales of terror in comics, graphic novels, and magazines.  Vampirella found her new home in March of 2010 when Dynamite Entertainment acquired the rights to the character from Harris Comics, and she has since appeared in a number of successful on-going series with the publisher.

Nick Barrucci, CEO and Publisher of Dynamite, says, “As we continue to grow the categories that we create for our fans at Dynamite, I’m extremely excited to be introducing our new line of collectible games with a property that has as rich of a history in comics as Vampirella.  This first offering captures everything we love about the character including the vibrant art of the classic Vampirella Magazine presented in a novel and entertaining way.”

Packaged in a unique Kickstarter exclusive illustrated box, these Vampirella Tarot Cards will feature the artwork of some of the all-time masters of the craft, including Frank Frazetta, Enrich, Esteban Maroto, and Paul Gulacy, all in one unique, collectible package! The complete box set of these genuine major and minor arcana tarot cards comes with detailed instructions, and will provide any collector or fan with a truly immersive experience in the world of Vampirella!

Production on the Vampirella Tarot Cards is well under way, with an expected shipping date of October, 2017. Backers who support the Vampirella Tarot Card Kickstarter have the opportunity to receive rewards, including digital editions, collectible prints and variant covers, full print collections, and artist signed exclusives! With tiers designed to fit any collector’s budget, backers will have the potential to enjoy a number of great rewards, including:

The Vampirella Tarot Card Kickstarter will only run for just over two weeks, beginning May 30th and ending June 15th. Backers can get on board and gain access to all of these amazing rewards by visiting https://www.kickstarter.com/projects/dynamiteent/vampirella-tarot-card-deck today!