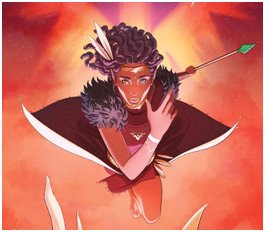 [Event] Who are the new superwomen of the universe?

On June 14 from 7–9 p.m., the National Museum of Women in the Arts in Washington, D.C. will present FRESH TALK: Who are the new superwomen of the universe?

FRESH TALK: Who are the new superwomen of the universe?

For much of comics history, women characters were introduced as plot devices for leading male characters with disheartening regularity. A new wave of superheroines is entering the comic universe, leading the fight for justice and dispelling traditional stereotypes in fiction and beyond. Speakers include Carolyn Cocca, author of Superwomen: Gender, Power, and Representation; Ariell Johnson, owner of Amalgam Comics & Coffeehouse, Philadelphia; Gabby Rivera, author of Marvel’s AMERICA series and the novel Juliet Takes a Breath; and Ashley Woods, illustrator, graphic novelist, and artist for the Stranger Comics series NIOBE: She is Life.

The program will be live-streamed as well as recorded and made available on the museum’s website shortly afterward. To watch the live stream, visit http://nmwa.org/freshtalk4change on the day of the event. Also, join conversations before, during and after Fresh Talk events with #FreshTalk4Change.

Carolyn Cocca / @carolyncocca
Carolyn Cocca is a political scientist and associate professor in the Department of Politics, Economics, and Law at the State University of New York, College at Old Westbury, where she teaches courses on U.S. Politics, the Politics of Gender and Sexuality, Civil Rights Law and Civil Liberties Law. She is the author of multiple publications about gender, law and the news media, but for the past few years she has been focused on gender, comics and pop-culture media. Her latest book Superwomen: Gender, Power, and Representation examines how female superheroes are portrayed in print, on TV and in movies, and how and why those portrayals have changed over time.

Ariell Johnson / @AmalgamPhilly
A true child of the ’80s, Ariell Johnson grew up on a diet of He-Man, She-Ra, Thundercats and Transformers. This would be the gateway to a lifelong love of superpowers, superheroes and comics. She turned this passion into a career at age 32 when she opened Amalgam Comics & Coffeehouse in Philadelphia, a hybrid comic-book store and coffee shop. Amalgam is the only black-woman owned shop of its kind, and the only black-woman owned comic book store on the East Coast. Johnson has a strong passion and commitment to diversity, representation and inclusivity. She uses her shop to showcase and promote works that are created by and feature people of color, different faiths, women and the LGBTQ community.

Gabby Rivera is currently making major waves for her new Marvel series starring America Chavez: a queer, Latinx superhero who’s been written and designed, crucially, by a queer Latinx. Rivera is also the author of Juliet Takes a Breath, a YA novel listed by Mic as one of the 25 essential books to read for Women’s History Month. As an activist, Rivera also gives back. She’s the Youth Programs Manager at GLSEN (pronounced “glisten”), a leading national education organization focused on ensuring safe and affirming schools for LGBTQ students. That means fewer incidents of bullying and harassment, and more students treated with respect. She’s also worked with Autostraddle.com for over five years as the QTPOC Speakeasy editor and A-Camp staff. As a film and multi-media teaching artist, Rivera has worked with social justice organizations like DreamYard Project, Inc. She has appeared as a featured panelist and counselor at the annual Autostraddle Queer Women’s Conference, and has presented at the Allied Media and Digital Media and Learning Conferences.

Born and raised in Chicago, Ashley A. Woods is an artist who got her start through self-publishing her action-fantasy comic series, Millennia War, while attending the International Academy of Design and Technology. After earning her degree in Film and Animation in 2007, she traveled to Kyoto, Japan, where she presented her work in a gallery showcase called Out Of Sequence. After returning to the states, work from her comics was included in the Black Comix compilation table-top book, which was used in college courses at various universities internationally. During summer 2015, she joined the team of Hunger Games actress Amandla Stenberg and Stranger Comics to work on NIOBE: She Is Life, which went on to sell tens of thousands of copies. Woods is currently working on LADY CASTLE with Delilah S. Dawson (Star Wars, Wicked As They Come) for BOOM! Studios and on the cover for Vampire Hunter D (Stranger Comics). When Woods isn’t working, she enjoys traveling, playing video games and studying Japanese.

Fresh Talk is the signature program of Women, Arts and Social Change (WASC), a bold new platform at the National Museum of Women in the Arts in Washington, D.C., composed of programs highlighting the power of women and the arts as catalysts for change. Programs convene women from a range of disciplines—people whose socially conscious ideas are reshaping lives and economies, engaging communities and empowering women. WASC is a unique forum for innovators and thought leaders to engage audiences in creative conversations on art, design, gender, equity, the environment, identity, education, health, social and economic opportunity, and more.

The Women, Arts and Social Change public program initiative is made possible through leadership gifts from Denise Littlefield Sobel, Lorna Meyer Calas and Dennis Calas, the MLDauray Arts Initiative, and the Swartz Foundation. Additional support is provided by the Bernstein Family Foundation, Marcia and Frank Carlucci, Deborah G. Carstens, the Ray and Dagmar Dolby Family Fund, and The Reva and David Logan Foundation.