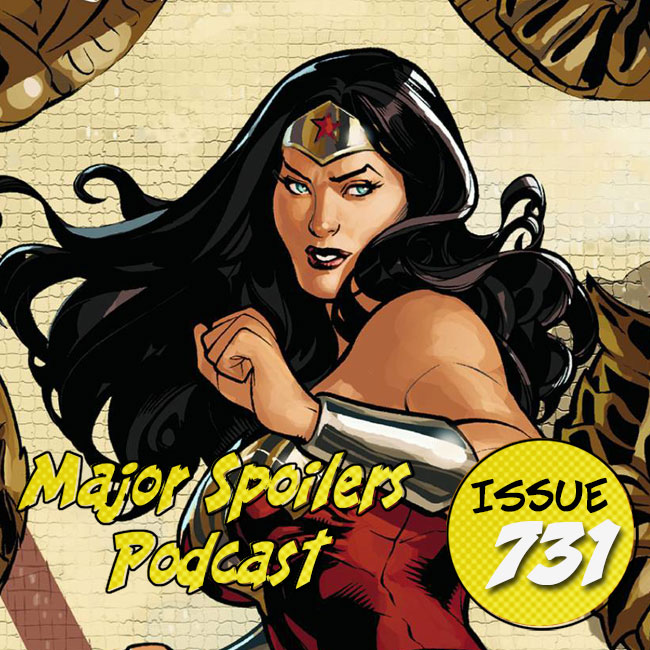 This week on the Major Spoilers Podcast: We examine Wonder Woman: The Circle, Talk X-men and the Fantastic Four, and partake in a five year plan… or not. Plus Flash #23, The Legion of Regrettable Supervillains, KISS/Vampirella #1, and The House #4!

NEWS
Are the X-Men and Fantastic Four back?

REVIEWS
STEPHEN
FLASH #23
Writer: Joshua Williamson
Artist: Carmine Di Giandomenico
“RUNNING SCARED” prelude! Barry Allen is at a crossroads. He’s lied to the woman he loves about his life as The Flash, and a rift is growing between him and his heroic young partner. Now, his greatest enemy has threatened to strike down everyone close to him! It’s time to make a tough choice that will launch The Flash into his most incredible mission yet: a siege on the 25th century stronghold of Eobard Thawne!

Every hero needs a villain. But not all villains are dangerous—some are incompetent, comical, or just . . . weird. In his follow-up to The League of Regrettable Superheroes, author Jon Morris presents over a hundred of the strangest, most stupefying supervillains to ever see print in comics. Meet D-list rogues like Brickbat (choice of weapon: poisonous bricks), Robbing Hood (steals from the poor to give to the rich), Swarm (a crook made of bees; Nazi bees), and many more. Drawing on the entire history of the medium, The Legion of Regrettable Supervillains affectionately and hilariously profiles oddball criminals from the history of comics.

RODRIGO
KISS/Vampirella
Writer: Chris Sebela
Art: Annapaola Martello
Publisher: Dynamite Entertainment
L.A. Is a strange town on the best of days, but in the summer of 1974, the City of Angels feels especially demonic. As temperatures soar and wildfires burn, all sorts of strange creatures are drawn to town, including Vampirella. While Vampi goes out and hunts down monsters all across La La Land – defending humanity from evil – she’s also killing it every night on stage as a member of the all-girl rock group Witchkraft – defending rock ‘n’ roll from a dying scene. Help arrives in the form of four creatures who’ve just flown into town: The Starchild, The Demon, The Spaceman and The Catman. Away from their home turf and trying to record their new album, KISS discove”rs that all their favorite L.A. bands have mysteriously broken up, disappeared, sold out, or gone crazy. Led by a driver who moonlights in the occult and haunted by satanic strangers dressed in black, KISS finds themselves drawn into a web conspiracy that threatens to kill rock ‘n’ roll itself.

ASHLEY
THE HOUSE #4
Writer: Drew Zucker
Artist: Phillip Sevy
As horror besieges them from all sides, Harker finds a sliver of salvation. But is this opening deliverance or doom?

DISCUSSION
WONDER WOMAN: THE CIRCLE
What is the deadly secret of the mysterious Circle? Wonder Woman will find out in this new hardcover collecting issues #14-19 of her hit series. Also in this volume, the reformed Secret Society of Super-Villains invades Paradise Island, led by Captain Nazi!