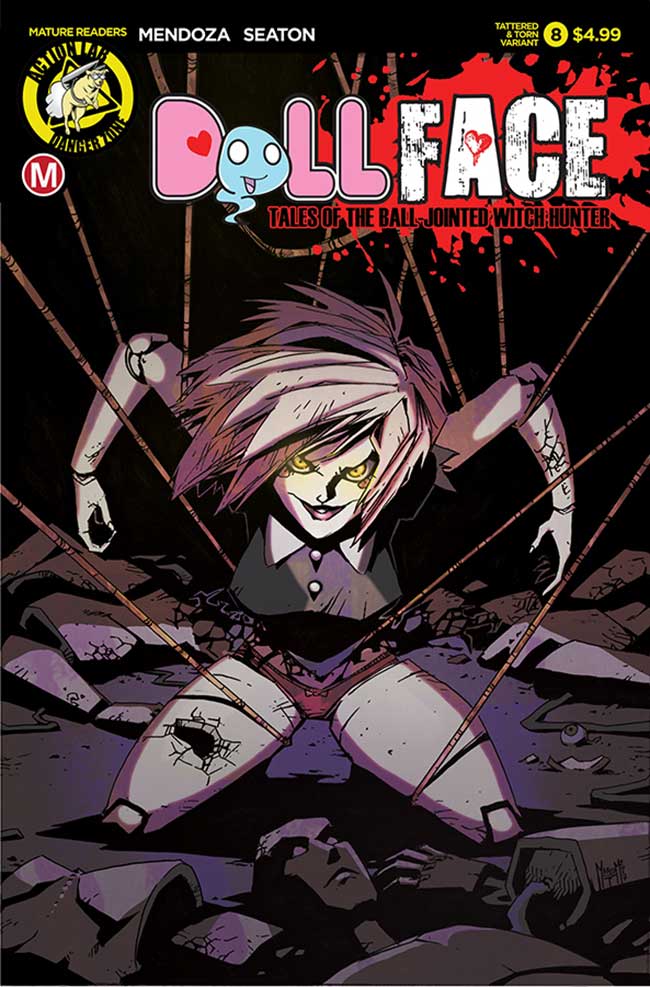 Where has Percy gone? Is there any way to find him? Or is too late? Join Clancy and Toby as they tumble through time and learn the true story of Percy’s first adventure!

AmeriKarate continues with a new storyline and the same outrageous, sexy B-movie martial arts action that you demand! Sam and Cynthia are faced with a new hidden foe and crime wave that has the city shaking in its city-boots! Join us for a high-kicking new adventure and a shocking twist that will leave you clutching your book with a kung fu grip!

Danger Zone has three popular monthly titles each starring different deadly ladies, and now for the first time, all three girls come together in one book! Danger Doll Squad #0 is the fuse that ignites the explosive upcoming series featuring Zombie Tramp, Vampblade, and DollFace!

This all new crossover features our three most popular characters in one special event with covers by three different artists (each with a risqué variant as well)!

Lila’s battle comes to an emotional end in this horrific tale of DollFace. Bandit and the Hero Cats of Skyworld are in for the fight of their lives as they confront the Crow King and his wretched warriors. It’s time to storm the castle in this all-out action-packed issue.

The boys of the Infinite Seven decide to blow off steam with a night on the town. Little do they know that they are being hunted by an enemy with vengeance on his mind and oil in his veins. Witness the rise of the CYBORG! Plus, a surprise ending that EVERYONE will be talking about! Recess is a time for fun, to clear ones mind of the drudgery of the classroom. But for the students of Baker Elementary room 221, it is a solemn occasion. The playground equipment has all gone missing. Worse yet, when Sherlock and Watson run into trouble with a group of ‘big kids,’ Sherlock is forced to face his worst nightmare, his older brother. Health care for super villains! A team of doctors are blackmailed into providing medical aid for the world’s worst bad guys. Led by brilliant Ethan Sharp, the doctors struggle with their own ethics and morals in a dangerous battlefield where saving a patient’s life can mean death for countless others! This graphic novel collects MEDISIN issues 1-3. Get in on the ground floor of Action Lab’s newest smash hit series. Humiliated in a TV talent contest where he performed a hypnotist act, Simon gets akumatized and turns into Simon Says. Now endowed with an amazing power of hypnosis, he only has to say “Simon Says” before any request to have people obey him. Simon Says: destroy Ladybug and Cat Noir! The Trash Krakken Part 1
Marinette and her friends are having fun at the beach when an akumatized fisherman, Silurus, crashes their party! Controlling the water and catfish in the Seine, Silurus makes a lot of trouble for Ladybug and Cat Noir. Will they be able to stop him before he takes his revenge out on the citizens of Paris? Collecting the hit mini-series, Spencer & Locke follows hard-boiled Detective Locke as he investigates a brutal murder with the strangest of partners — his childhood imaginary panther, Spencer. But when they face brutal gunfights, deadly car chases and memories of Locke’s traumatic upbringing, can this unlikely pair survive long enough to find the truth? Collects Spencer & Locke #1-4. The adventure begins here! When Miru crash lands on the world of Gaia, he inadvertently becomes the most wanted creature around. Along with a rag-tag band of allies, Miru begins his journey to save all existence from the devious Dr. Monopoly and his wicked master, the demon king, Samsura! In the world of Toyetica, a tiny race of humanoids called Bittles jockeys for its place in the world alongside humans. Luckily, there’s always steady employment as models for children’s toys! At Dollington Academy, young Bittles go to school to hone their toy theme, choose their accessories and prove to toy companies that they’re the most marketable, lovable and toyetic of them all. Whether it’s as an action figure, fashion doll or The Next Big Thing, for these young students, the race to the toy store is on!

With the new space vampire hybrid threat, Katie must seek help from her sworn enemy… Zombie Tramp! But they also need the help of another unlikely ally… DollFace!!

This Danger Doll Squad tie-in features 3 covers (regular, artist, and 90s style), each with a risqué variant as well! Comic fan, cosplayer, and shop manager Katie Carva continues her quest as Vampblade. Fighting invisible other-dimensional vampires straight from the 90s comics of her namesake, the blades push her to all new extremes! It’s all new next-level Vampblade adventures, shiny and chrome!

Collects the complete first story arc for the second season of the hit Danger Zone series.

The battle begins as Xula and Janey go head to head in an epic showdown for survival and power.

The second issue in the remastered reprinting of the highly collectible original mini-series, that was never before released in single issues to the direct market.

Features a new cover by series creator Dan Mendoza, plus new SEXY and GORY variants (all with risqué variants), plus a “replica” variant (recreating the rare original issue cover)! While Janey takes a much needed dirt nap, the focus shifts to her supporting cast. Can the voodoo queen, Xula, complete her path to amplified power? Where has the undead child menace Morning gone? And what is the true nature of the mysterious and powerful Kaiju Queen?!