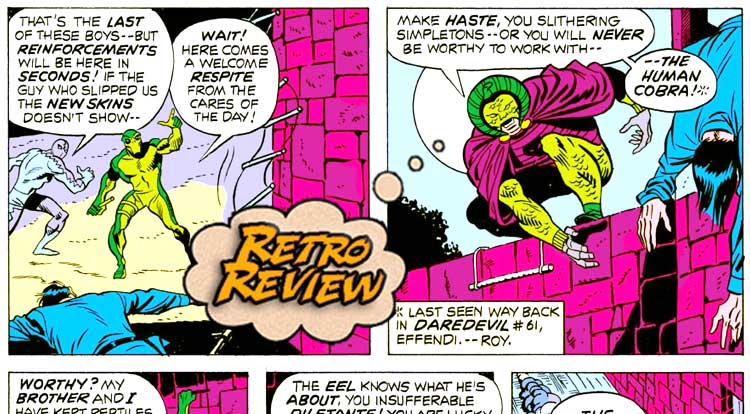 Time for a peek behind the scenes of the creative process here in Retro Review corner:  Sometimes, I work from a detailed spreadsheet cross-referencing comics eras, publishers, genres, important character appearances and milestones, carefully collated after years of collecting and archiving back issues, selecting each book carefully based on it’s relevance, quality and historical importance… Previously in Captain America: Frozen in World War II, Steve Rogers was preserved for decades until he was awakened by the Mighty Avengers in the present day.  For a man of the 1940s, the malaise of the 1970s (an era where Captain America had to have been awakened, thanks to Marvel’s ever-sliding timeline) was very difficult to process.  Fortunately, he has a little help from his friends, namely Sam Wilson, the fearless Falcon, a young African-American man whose view of America is very different from Steve’s Greatest Generation perspective.  He’s also fallen in love with Sharon Carter, the younger sister of his main squeeze circa WWII, a situation complicated by the return of said lady friend from a prolonged bout of amnesia.

‘Course, this being the Marvel Universe, the constant parade of costumed goons is also something of a complication… Both of these criminals, The Eel and The Viper, have menaced Captain America alone in the past.  Their combined power, exacerbated by that of The Cobra, best known in 1973 for menacing Thor with his partner, Mister Hyde, makes for a nigh-unstoppable force: The Serpent Squad.

The snotty pedantic part of me wants to point out that an eel is actually a fish, not a snake, but I feel that’s unnecessary, as Spoilerites are a well-read group, and such an observation would be unnecessary.

While the Two-Serpents-And-One-Anguiloforme Squad plans their reign of terror, we move our attention to Captain America himself, returning to the home of his no-longer-amnesiac former girlfriend, one Peggy Carter. And, yes, it is indeed THAT Peggy Carter, as embodied on film and television by Hayley Atwell.  With World War II some 25 years gone as of this issue’s publishing, Peggy is shown as a nice lady in her fifties, while Cap feels guilty over his new love affair withPeggy’s younger sister, Sharon.  (In current continuity, Sharon is referred to as Peggy’s great-niece; Thanks sliding timeline!)  Cap and Peggy go for a nice walk on the grounds to make her feel at home once again, only to bump into Dave Cox, a veteran of the then-recent Vietnam war.  Dave’s take on the battlefield and Captain America’s are wildly different, thanks to their respective conflicts, and Dave returned home as a conscientious objector who tells Cap and Peggy, “I want nothing to do with violence.”

Even if you’ve read Secret Empire #2, you are likely a bit confused about who these guys in tights are.  This original Serpent Squad is the basis for the later Serpent Society, a larger grouping of villains with additional snake-types like Anaconda, Sidewinder and Bushmaster added in.  As for the Squad, after reading about Cap’s recent reunion with Peggy in the papers, make haste for her home address (which seems like a foolish thing to have put in the papers, but…  it’s 1973, things were different) to confront the CapFalc team head on! Panel three here also shows off an important letterer’s adage of old-school comics: DO NOT USE THE WORD “FLICK” AS UPPERCASE LETTERS CAN BLEED TOGETHER IN REPRODUCTION.  The three-on-two assault is successful enough to give Captain America some severe electrical burns on his hands, but not enough to keep the Squad from fleeing to regroup, all the while showing off the superb drafting skills of Sal Buscema, aka The Only Man Who Can Draw The Eel Worth A Tinker’s Cuss.  The heroes give chase, only to be surprised that Peggy follows them, showing for the first time the kind of chutzpah that would eventually become her trademark on film, and the battle ends up on the doorstep of Dave Cox… Even faced with superhumans battling it out, and an injured Captain America heavily outgunned, Dave refuses to bend his principles, insisting that non-violence is his only option.  He even stands by this creed when tortured by The Eel’s electrical blasts, distracting the slithery trio long enough for the good Captain to take the initiative in another wondrous Beautiful Buscema Battle Sequence™! Cobra and Viper are taken down by Cap’s furious assault, leaving the slippery ol’ Eel to make his own escape into the woods, proving once again why my grandmother always said: “Eels are not snakes, no matter what Steve Englehart says.”

Oh, and also, watch out for The Falcon because POW! Thus, from the future, we cue the ‘Animal House’ closing credits sequence:

All in all, this issue is pretty stellar, introducing a new villain team, a noteworthy supporting character making a stand against violence and giving Cap and Falcon some strong moments, all in the space of 24 pages.  Captain America #163 accidentally creates an important bit of Cap lore with the Serpent Squad, but best of all, it entertains with strong work from Englehart, Buscema and the entire creative team, earning a darn-near perfect 4.5 out of 5 stars overall.

If only eels were serpents, it coulda gotta perfect 5…  C’est la vie.

Buscema is amazing, Englehart packs the book with excitement and emotion and some great fight sequences... Good stuff!