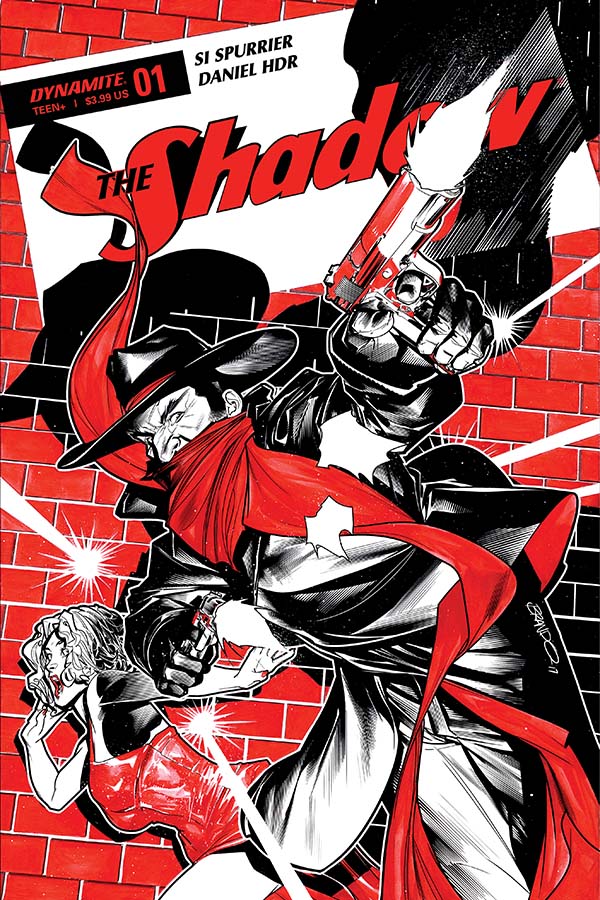 Dynamite Entertainment has hired Si Spurrier to bring The Shadow into the modern age in The Shadow: Leviathan.

While some people may be happy about this news, there are very few pulp characters who have been able to successfully make the transition to the modern day. Doc Savage has tried and failed multiple times, and Will Eisner’s The Spirit just looks dumb holding a cell phone. We’ve even seen what happens when The Shadow was updated for the ’90s, leading to a robot body and head in a jar… The current Batman/The Shadow run has been okay, though The Shadow still seems out of place.

But, Dynamite Entertainment and Conde Nast think it is time to try again, and the publisher has hired Si Spurrier to tell the tale.

Writer Si Spurrier said, “For me – and I suspect for most comics creators – The Shadow is an irresistible property. The hat and scarf, the cold eyes and colder laugh, the wisp of cordite and the flourish of a cape: all plucked wholesale from the noir pulps and radio plays of the 1930’s. You don’t say “no” to a true primogenitor like that. On the taxonomical chart of Western comics he’s a common ancestor for a sizeable chunk of the marketplace. Every street vigilante, every masked crime-fighter, every necessary monster: he’s in the DNA of them all. A living fossil, a coelacanth or goblin-shark for the comics world, swimming in waters of ice and ink. And like all perfectly engineered things he endures – he flourishes – amidst newer, cockier, less perfect specimens.

Spurrier added, “What I most love about the Shadow is, like all good legends, he tells us even more about the present than the past. In this new story I’m dragging the legend into the modern world, with all its melting-pot problems and changing attitudes. This isn’t the world the Shadow was born into, with its pinstripe gangsters and mystic monsters (although we’ll be visiting that one too). Instead our main story unravels in a world of corruptions and petty politics, prejudices and hate. A world with a frightening new regime taking control. A world where true power lies not with those who hold the reins, but with those who control the story. How can two guns and a devil’s stare fight the 21st Century? I couldn’t be prouder to be telling this tale. With the exceptional Daniel HDR by my side, The Shadow: Leviathan is a smart, slick, brutal takedown of today, with nothing less than a living idea holding its finger to the trigger.”

What do we know about this story right now?

For the better part of a century, the Shadow’s sinister laughter brought the chill of fear to evil-doers – but in our modern times, the streets of Manhattan have gone largely silent. But he is not forgotten. Not by the people he’s saved. Mary Jerez, is one of those people. The Shadow saved her from a horrifying school shooting – Mary knows all too well what evil lurks in the hearts of men.  So when a horribly burnt man – incredibly strong and fierce, despite these terrible injuries- arrives under her care as a resident at the hospital – she believes she knows who he is, too. Is this mysterious man actually the Shadow – and with Mary’s help, will evil-doers again know what it means to fear his terrible justice?

I do enjoy The Shadow tales, and though I have a lot of misgivings about the ability to modernize a hero that was wonderful during a time before The Bomb, I’ll give this a chance when the first issue of The Shadow: Leviathan arrives in stores in August.