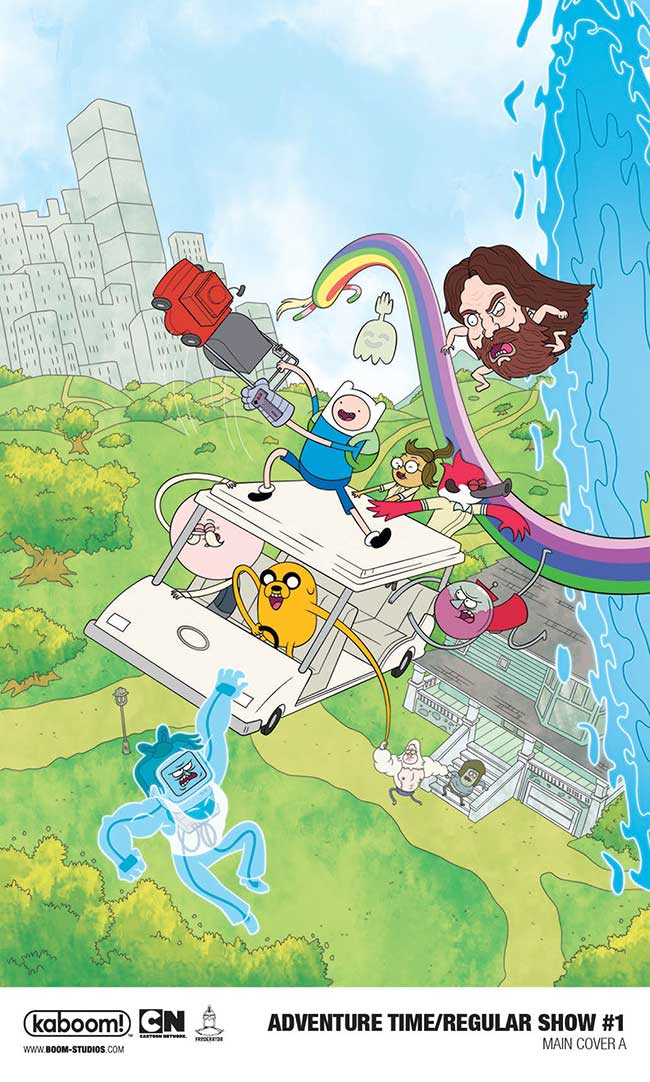 Instead of waiting for your favorite cartoon network to create a crossover between Adventure Time and Regular Show, BOOM! Studios is doing it in comic book form that kicks off in August.

When a powerful new villain threatens to conquer Adventure Time’s Land of Ooo, Princess Bubblegum sends Finn and Jake on a desperate quest to find The Power that can save the land—a power that Skips from Regular Show just happens to be hiding! Finn and Jake’s arrival only exacerbates an existing tension between Mordecai and Rigby, and the trip back to Ooo threatens to tear two sets of bros apart… forever.

The six-issue series is written by Conor McCreery with art by Mattia Di Meo.

“When you get the opportunity to put your little flag into the surface of not one, but two of the greatest story worlds in recent history, you gotta say yes!” exclaims McCreery. “I’m excited, terrified, tickled, and tormented by all the amazing characters and storylines that could go into this crazy thing. Adventure Time and Regular Show are special to me because of the combination of out-of-left-field humor and really deep emotion. I’m going to try to honor those twin engines as best I can with a story that has a LOT of weird stuff, a whack of battles, a few tears, and at least one incidence of Ice King being a patoot.”

So, Adventure Time/Regular Show fans, are you excited, or super excited about this announcement?