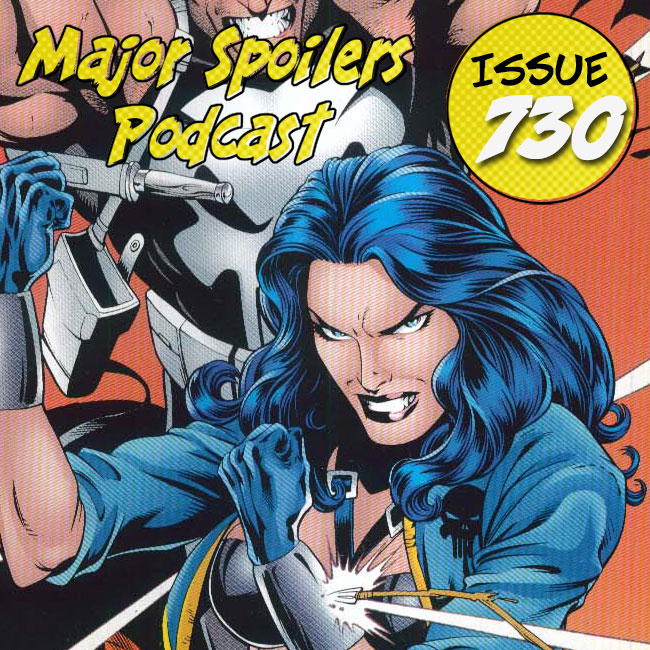 Major Spoilers Podcast #730: The Return to the Amalgam Universe

This week on the Major Spoilers Podcast: It’s time to make another trip to the Amalgam Universe. We also review Destroyer #1, The Wicked + The Divine: 455 AD #1, Animal Jam, and the most recent episode of Doctor Who. Plus which Roger Moore Bond film is the best Roger Moore Bond film?

REVIEWS
STEPHEN
Victor LaValle's Destroyer #1 (of 6)
Writer: Victor LaValle
Artist: Dietrich Smith
Publisher: BOOM! Studios
Price: $3.99
When the last descendant of the Frankenstein family loses her only son to a police shooting, she turns to science for her own justice...putting her on a crash course with her family's original monster and his quest to eliminate humanity. An intense, unflinching story exploring the legacies of love, loss, and vengeance placed firmly in the tense atmosphere and current events of the modern-day United States.

MATTHEW
The Wicked + The Divine: 455 AD #1
Writer: Kieron Gillen
Artist: André Lima Araújo
Publisher: Image Comics
Cover Price: $3.99
“CITY OF GOD” Nothing lives forever, be it man, god, or empire, but that doesn’t mean you have to go quietly. Join us as Lucifer refuses to fiddle while the Roman Empire burns. The critically acclaimed THE WICKED + THE DIVINE inevitably vandalizes history as it turns to the Sack of Rome. Showcasing the epic art of ANDRÉ LIMA ARAÚJO (Avengers AI, Man Plus), the special is NOT included in the forthcoming fifth volume of THE WICKED + THE DIVINE.

RODRIGO
Animal Jam
Writer: Fernando Ruiz, Eric Esquivel
Art: Fernando Ruiz
Cover Price: $3.99
Hey Kids, it's Animal Jam! The world's largest online playground for kids where they can learn about the natural world is now a new and exciting comic! Join in on the fun for all new adventures with all of your favorite characters!

ASHLEY
DOCTOR WHO 10.6
A long time ago, the Doctor is sent to execute Missy, only to have Nardole interrupt on the behest of River Song. He refuses to kill Missy, instead opting to imprison and guard her for 1000 years. In the present, the Pope comes to the Doctor, asking to help translate a text called "Veritas". Everyone who has read it has committed suicide, and the Doctor, Nardole, and Bill are brought to the Vatican to investigate. While there, Bill and Nardole discover a portal, which leads them to the Pentagon. They find the portals being projected leading all over the world. The Doctor temporarily restores his sight using Time Lord technology, but is ambushed by aliens. Nardole realizes the projectors are not projecting portals, but the whole world. His realization causes him to dematerialize. Bill finds the Doctor, who tells her the world is a simulation, and Veritas contains the proof. Bill then disappears due to the alien's intervention, the Doctor realizing this is a test to see if they can conquer the Earth. However, the simulation is too exact, as his sonic sunglasses still work perfectly, and the virtual Doctor sends his information to the real one to warn of the coming invasion.

DISCUSSION
Amalgam
"Assassins
On Earth-9602, two deadly assassins named Catsai and Dare decide to take on The Big Question. On their way they easily kill Deadeye and Lethal and defeat Wired. After The Big Question blinds Dare, Catsai manages to deliver the fatal blow."

"Bullets and Bracelets
Bullets and Bracelets is the adventures of the team of Wonder Woman (Diana Prince) and The Punisher (Trevor Castle). The two had apparently been husband and wife in the Amalgam universe, but their union had come to tears after their first child was born. In this adventure, they reunite to find their baby who had been kidnapped by the Hand, although more nefarious forces including the villainous Thanoseid (read: Darkseid + Thanos) are masterminding the abduction. "