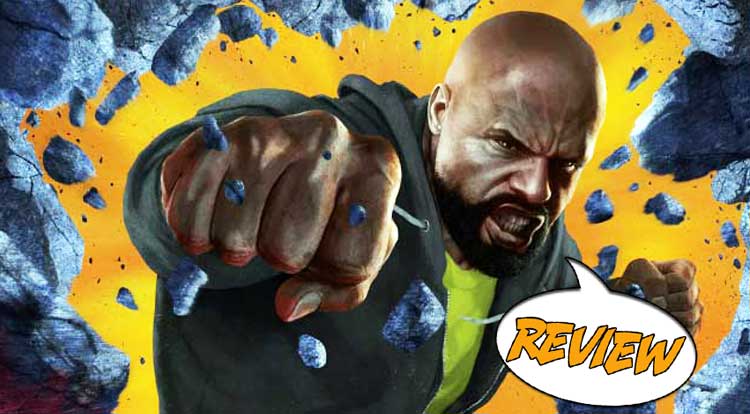 People come to Luke Cage with their problems…  Fortunately, the Hero for Hire is super-strong, bulletproof and the kind of man who’ll help you with your problems.  Your Major Spoilers review of Luke Cage #1 awaits! Previously in Luke Cage: “While imprisoned for a crime he did not commit, Luke Cage was subjected to medical experiments that gave him superhuman strength and bulletproof skin.  Once free, he used his abilities to become a Hero for Hire — protecting people who had nowhere else to turn.  His mission has taken him to Wakanda, The Savage Land, even Avengers Mansion, but Luke has never forgotten where he came from.”

THE HERO FOR HIRE

I really like the opening of this issue: Called in by a desperate family whose daughter is being held hostage, Luke takes his usual head-on tack and walks right into the line of fire to save her.  We get an interesting look into his mind (Luke muses that he buys cheap shirts in bulk because the effect of a bullet ripping fabric but bouncing off his skin is a psychological edge), we see his smarts in action (he talks the kidnapper down with a false offer to pay the comically small $5,000 ransom) and we see how people respond to him.  And then, the phone call comes.  His old friend, Noah Burstein, the doctor who made him into a Power Man back in the day, is dead.  Luke travels to Louisiana for the funeral, getting involved with other beneficiaries of Burstein’s process, a family whose son was cured of a rare disease thanks to his work.  Of course, other subjects of the Burstein Process have been shown to have tiny problems with psychotic rages (much like Warhawk, an old-school Cage villain) and when he starts to poke into the circumstances of Noah’s death, Luke gets bushwhacked by a carload of masked men.  When they break his unbreakable skin, Luke is shocked and left bleeding in the road, when he is suddenly saved by that selfsame Warhawk, who calls him “little brother” as we fade to black…

It’s been a while since we’ve really delve into Luke’s past in the comics, rather than his relationships with Danny Rand, with Jessica Jones, with the Avengers.  While I’m troubled by how easily he is injured in these pages, the final page reveal and the strength of Walker’s narrative let me forgive it.  Nelson Blake’s art is also solid, delivering us a Luke Cage who is imposing, impressive, but remarkably capable of expression and even able to show vulnerability when necessary.  The storytelling is strong, and aside from some panels which I would prefer have more detailed backgrounds, I don’t have many complaints.  (One very subtle sequence early in the book foreshadows the appearance of Warhawk at the end, something I didn’t even catch until my second reading, very well-done stuff.)  All in all, as someone whose first Luke Cage story was the first Luke Cage story, thanks to a local junk shop full of comics, this issue balances the modern take on Cage with the oldest of old-school takes, a perfect balance by writer Walker.

THE BOTTOM LINE: A REALLY STRONG TAKE ON CAGE

This is perhaps my favorite Luke Cage story since his appearances in ‘Alias’ and ‘The Pulse’, giving him a well-rounded personality, a strong character voice and imposing visuals, all the while reminding us that there’s a human being inside that steel skin.  Luke Cage #1 is excellent, setting up a mystery and bringing in unexpected players to deal with story elements dating back to Hero For Hire #1 in ’73, earning a well-deserved 4.5 out of 5 stars overall.  I do hope that we don’t see Luke getting physically beaten down this hard on a regular basis, but that’s a minor complaint in a story this tight.

Walker's Luke Cage voice is perfect, the story is intriguing and the art is top notch. An impressive start...