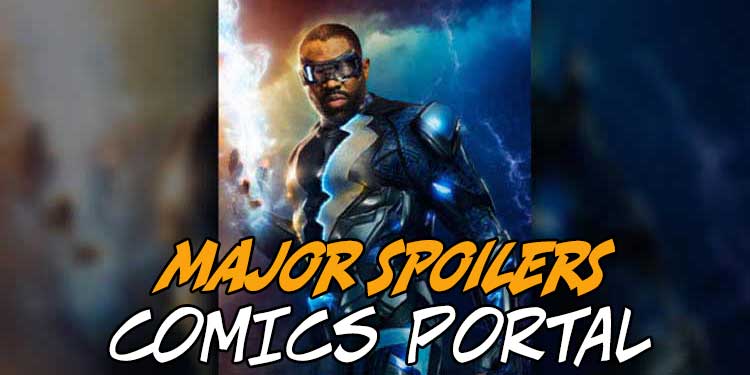 During the last week, the five major networks released their Fall schedules and, once again, the influence of comics and comics-related properties continues to grow, thankfully!

There’s Orphans, which sounds an awful lot like mutants to me. I won’t get into the Trek-alike show here, though.

Like The Ray, Black Lightning is a big step forward for The CW. It’s a mid-season replacement that I’m really looking forward to. For more and a preview, check out this story here at MajorSpoilers.com! I can clearly remember the first black superhero I read about – the Black Panther in a Fantastic Four issue. The whole premise of the character and Wakanda really enchanted me. I’ve been reading his appearances as often as I can. I’m looking forward to the movie focusing on this groundbreaking hero.

I know I’ve wretched both here and in my podcast that I don’t like seeing characters of color, as I like to put it, stuffed into an existing costume. For instance, Miles Morales is fine, but as Spider-Man, he leaves me cold. He could easily take another heroic identity and be more interesting, seems to me. Black Lightning has always been a hero of color that I’ve enjoyed reading about.

Black Lightning is different from Black Panther in that he’s more realistic, in my opinion, if that’s possible. While there may be kingdoms like Wakanda hidden in Africa, Pierce’s home base of the city is something I can more readily relate to – although I freely admit I don’t always understand the references.

I have a friend of color from the inner city who loves sci-fi and comics like I do, and we’ve found it necessary, in some circumstances, to translate for each other so we can understand what’s going on. For instance, he never could “get” Buffy the Vampire Slayer and its suburban high-school focus. It wasn’t like anything he’d experienced, so he’d ask just what some of things happening really were. I’d do my best to explain them to him.

The situation reversed when I watched The Wire on HBO. There were times I didn’t understand a single word the characters on the screen were saying. I’d ask my friend about it, and he’d translate it for me. That helped me enjoy the series more!

I was happy to hear that The CW was animating The Ray, the first lead gay character for a network series. While Jefferson Pierce won’t be the first lead black character on TV, I’m optimistic the show can delve into subjects the other CW superheroics can’t. I won’t even venture a guess as to what they might be, but I’m hopeful that will happen.

I should note that Luke Cage was just such a show on Netflix. It took place in an inner-city community, and featured characters of color almost entirely. I really liked the concept, especially as it appeared in the Marvel comics. However, I’ve found the pacing of the show really, really slow, with characters taking long breaks between sentences or even phrases. I’ve only made it through the first four episodes of that series. I haven’t even started on Iron Fist, but I hope I will get through Luke Cage first. We’ll see!

NOT PART OF THE ‘ARROW-VERSE’ I have to say that I’m somewhat torn over the news that Black Lightning won’t be part of the “Arrow-verse,” as they call it – the universes that comprise the other CW shows.

On some levels, it gives the show the chance to find its own niche, away from the rest. On the other hand, Pierce being able to interact as an equal with the other CW heroes would mean a lot to me. I was never convinced that the character was as respected in the DC comics as he should have been. It would be a great step up if Black Lightning would save the day in a five-part crossover even! Yeah!

Of course, my hope is that the hero will get some love from DC Comics as well. An ongoing title would be fun and give the character the attention I think he deserves. Again, good writing will make the difference, and good art would be excellent. Maybe DC could give creators of color a shot, much like Marvel did with the recent Black Panther comic?

I should point out that I also loved the Milestone universe, a group of comics largely made by diverse creators featuring diverse characters. Icon was a favorite, their version of Superman. Could we see a Milestone show on The CW sometime soon? Please?

What about you? What do you think about this CW show and possible comic? Do you think Luke Cage and Black Lightning are the beginning of something good on TV? Or should we not move TV superheroes in that direction? What can be done to help different communities understand one another through comics and comics-related TV shows? Whatever your opinion, please share your thoughts in the space below!