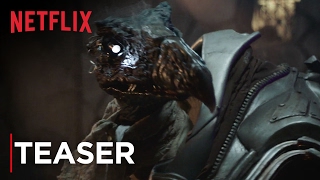 [Television] The Dark Crystal prequel gets greenlit from Netflix

Dark Crystal fans have already devoured the series from BOOM! Studios, and now The Jim Henson Company, Louis Leterrier, and Netflix will produce a prequel series for the online network.

Titled, “The Dark Crystal: Age of Resistance”, takes us back ot the world of Thra, where three Gelflings discover the secret behind the Skeksis’ power.

“Louis Leterrier is passionate about the world of ‘The Dark Crystal’ and has an incredible creative vision for the series,” said Lisa Henson, CEO of The Jim Henson Company. “He brings this passion to every facet of the production as he leads the talented team of artists and writers that are bringing this entire universe to life. Netflix has a deep respect for my father’s original work and the many people it inspired. They are the perfect partners to create this next epic chapter in ‘The Dark Crystal’ story for new fans and the loyal fans who have waited so long for more adventures from this world.”

With Netflix doing a great job on its high profile series, I have little doubt that the 10-episode series will be horrible. Of course the big thing that hasn’t been addressed is if this will be a all puppet series, computer generated imagery, traditional animation, or some crazy live action production. I’m hoping for full on puppetry, but if that is the case, this will be a really expensive mini-series as many of the original puppets have deteriorated or been sold off over the years.

That said, this is really great news, and I’m sure more than a few of you are jumping up and down with excitement. No word on a release date, but Netflix says it is coming soon.