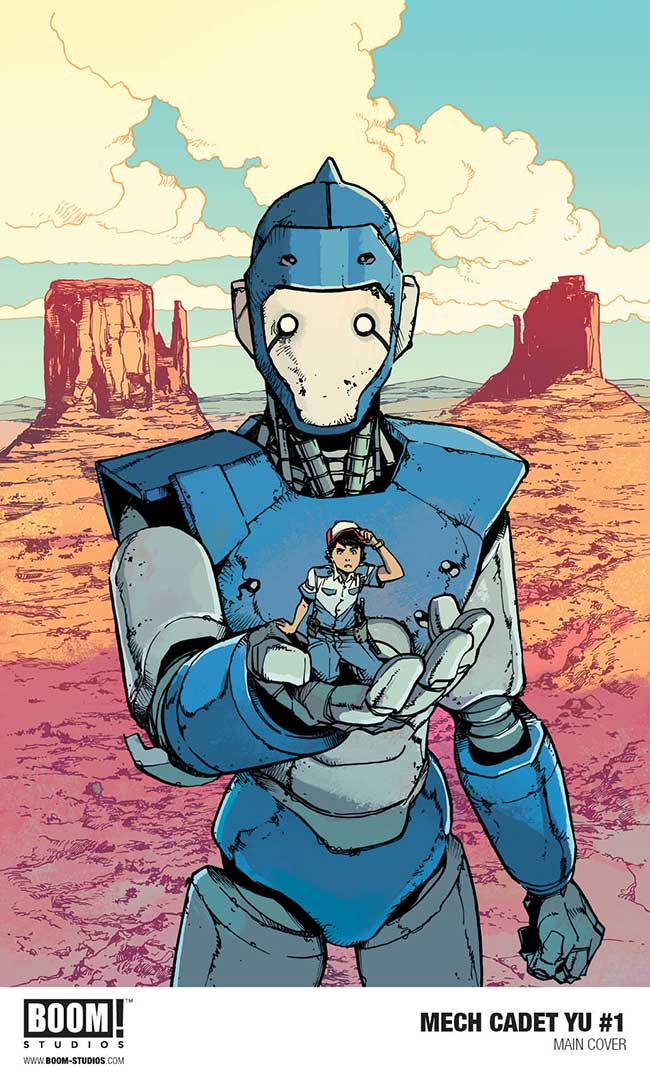 What is the best thing about the ’80s? Well, beside Raiders of the Lost Ark and Empire Strikes Back, those of us in the United States were introduced to giant mechs and their human drivers. In August, Greg Pack and Takeshi Miyazawa bring Mech Cadet Yu to comic book stores, and it feels like we’re about to visit the ’80s all over again.

“I love giant robots. And I love quirky, personal stories about lonely kids trying to find their crew and mission in the world,” says Pak. “So many of the stories I’ve written over the years are rooted in things I loved the most when I was 10 years old—like giant robots, natch. It’s a thrill to finally be writing that kind of story from the point of view of a character who’s an actual kid. And I’m excited to be writing multi-dimensional Asian American lead characters in a genre that’s so beloved by so many Asian Americans, but seldom features them.”

Mech Cadet Yu is the story of Stanford Yu, a young janitor who is unexpectedly chosen to join the sacred ranks of the mech cadets at Sky Corps Academy. Once a year, giant robots from outer space come to Earth to bond with the cadets to defend the world from terrifying aliens known as the Sharg. After he unintentionally bonds with his robot, Yu is thrown into training, hoping to prove he is worthy of being there at all.

I want this now! It sounds so good just from the solicitation information. Plus the art from Miyazawa looks great! By the way, this is not the first time Pak and Miyazawa have worked together. If you are a fan of their Code Monkey Save World and ABC Disgusting from Kickstarter, you may know them from their work on Marvel’s Totally Awesome Hulk. All of these have been a great deal of fun, so Mech Cadet Yu should be another wild ride.

“To me, working with Greg Pak is a chance to work on something special,” adds Miyazawa. “Mech Cadet Yu is one of those special projects, an underdog story about beating the odds, making friends, and kicking alien butt in giant robots. When he came to me with the idea, it was something I couldn’t turn down.”

The only downside about all of this is we have to wait until August to get our hands on the first issue.