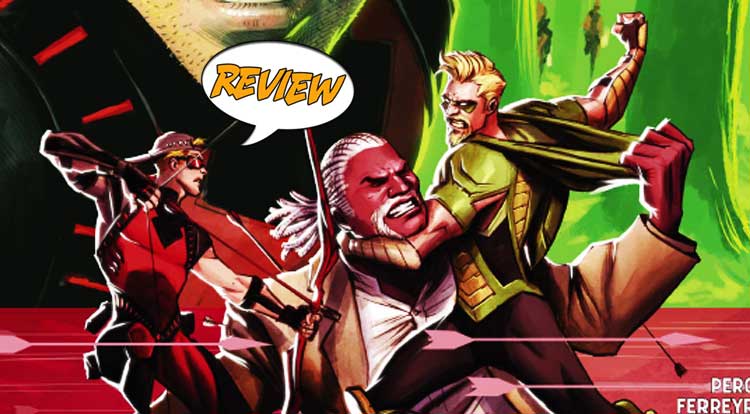 There’s a conspiracy afoot, and somehow, Green Arrow’s family is at the heart of it.  Arsenal has returned to the fold, but will even that be enough to keep Oliver above water?  Your Major Spoilers review of Green Arrow #23 awaits! Previously in Green Arrow:  “As Green Arrow discovers the Ninth’s Circle’s true plan for Seattle, so too does Oliver Queen learn the truth about his family’s ancient role in the city’s coming destruction…”

THE TRUTH IN FAIRY TALES

As we open this issue, Oliver Queen and his half-sister Emiko (now working alongside him as Red Arrow) are in the field, tracking down the Ninth Circle’s agents in the hopes of figuring out why they’ve targeted him.  Things get complicated quickly when poisonous mercenary Cheshire makes the scene and challenges Emiko to hand-to-envenomed-talons combat.  She’s nearly overwhelmed, until Cheshire is chased off by Arsenal, Green Arrow’s original sidekick.  There’s some lovely back-and-forth about his former relationship with Cheshire, an interesting b-plot with Black Canary investigating the circle and Green Arrow in all-out combat with the Circle’s agents, ending with a shocking last-page cliffhanger full of massive property damage, while Green Arrow fights for his life against an army of bad types…

I like Emiko, even if she seems to be a DCU equivalent of Thea Queen on TV, and her interactions with Roy/Arsenal in this issue are the star, at least as far as characterization and dialogue go.  That’s not to say there isn’t good stuff throughout the issue in terms of the talky-talky, and best of all, Juan Ferreyra’s art is excellent throughout.  The battle between Cheshire and Red Arrow is lovely, while Green Arrow’s exploration in the woods actually feels like it’s drawn by someone who’s actually SEEN a wooded area.  (You don’t always get that, especially in comics that come from the big two companies.)  I also enjoy seeing that the traditional butting of heads of the Black Canary/Green Arrow relationship has returned in the Rebirth era, but I like it even more that they both clearly have affection for the other, even while they’re irritated and/or separated…

THE BOTTOM LINE: AN INTERESTING SYNTHESIS

By taking some of the most successful bits of the CW ‘Arrow’ show and bringing back some elements of Green Arrow that have been missing since 2011, this issue distills a really good take on Oliver Queen and his life that should appeal to fans new and old.  Green Arrow #23 is really good, with a lot of characters, a lot of action but a clarity of narrative and dialogue, earning a well-deserved 4 out of 5 stars overall.  All we need now is the other five Seven Soldiers and I’ll be the happiest I’ve been with Green Arrow since Kevin Smith…

Excellent art, an intriguing new partner, a secret cabal and explosions! What's not to love?