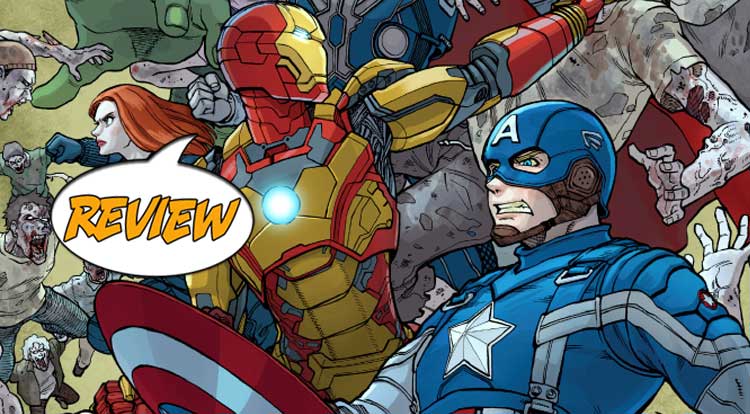 The original manga is adapted into English for the first time!

And, maaaan, is it ever terrifying…  Your Major Spoilers review of Zombies Assemble #1 awaits! Previously in Zombies Assemble: “Time and again, the Avengers have assembled to save the Earth from destruction. But they’ve never had to face a threat as gruesome and UNDEAD as this one! Now, Earth’s Mightiest Heroes must fight to contain an outbreak of horrifying zombies, and stop them from spreading across the Earth! But not all of the Avengers will escape uninfected…”

SET IN THE MOVIE UNIVERSE

We open at the birthday of Tony Stark (who is a super-cute anime-styled version of Robert Downey, Jr.), whose Avengers colleagues have gathered to throw a surprise party for him at Stark Tower.  This takes place after the first film, but the presence of six core Avengers (Hulk, Thor, Captain America, Iron Man, Black Widow and Hawkeye) places it before the second, btw.  Stark is suddenly surprised by his party being interrupted by A ZOMBIE ATTACK!!!!

…which turns out to be Captain America playing a practical joke.  As the party continues, though, a second zombie arrives, this one seemingly with an impossible makeup job.  The team quickly discovers that this is a real zombie, and quickly gets Pepper and Rhodey to evacuate civilians while they watch the crew of the tower slowly succumb to the virus.  Worse still, the zombie plague proves to be more dangerous than they expected, as one of their own turns zombie, and then a second Avenger is infected…

There’s a lovely bit of black comedy in this issue as a zombified hero accidentally tears out their own eye, a scene rendered with just enough realism to chill the blood and really hammer home the seriousness of the situation.  Combine that with the sight of zombies in the streets of New York and a slowly shrinking Avengers team to deal with the crisis, and you’ve got a tense issue that get more and more heart-pounding as it goes.  I heartily respect the decision to present Yusuku Komiyama’s original art in its right-to-left format, rather than trying to flip or reposition panels, as it’s truly beautiful stuff.  (The issue is presented in black-and-white, but with the deft use of blacks and the artist’s skill, you won’t miss the color.  Heck, it even adds to the horror factor.)  Best of all, this issue feels 100% in keeping with the movie Avengers, without the difficult process of trying to coordinate them with the mainstream comic versions, making it easy to figure out the characters and their positioning…

This issue succeeds in two difficult hybridizations: Making a superhero/zombie mashup work and making Japanese and American comics sensibilities mesh on the page.  Zombies Assemble #1 gets a lot of things right, from the art to the level of gore to the tactical application of humor within the confines of a story that relies on the scary, earning a truly excellent 4.5 out of 5 stars overall.  If you’re looking for a pure Avengers tale that also breaks new ground, this is a book you’ll want to pick up.  Just remember to read right to left!

Clear, strong art, a simple but effective story and just enough horror to remind you that you're not dealing with mainstream Marvel... Highly recommended!