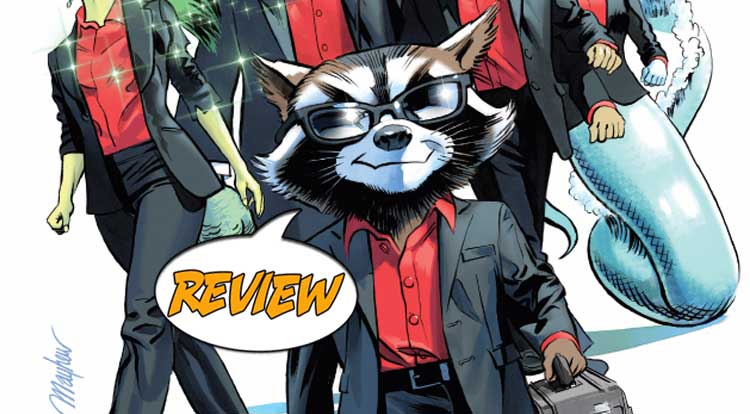 The Guardians of the Galaxy just aren’t quite right without Rocket Racoon.  But what does he get up to when he’s out on his own?  Your Major Spoilers review of Rocket #1 awaits! Previously in Rocket: “Rocket stands about four feet tall (Terran U.S. customary units) and weight about 100 pounds (carrying 45 pounds of ammunition.)  He’s got steady hands, steely nerves, a keen strategic mind and a fluffy tail — one of the features that’s given him his sobriquet, Rocket Raccoon.  A member of the Guardians Of The Galaxy, Rocket is also the only one of his kind.  It’s a lonely life…  a restless life…  He goes out on his own sometimes…

It’s the classic story: Hero drowning his sorrows in a sleazy bar.  Ex-girlfriend arrives with one last favor to ask.  Hero foolishly agrees to be part of the plan, assembles a team of experts to help her with one last score…

‘Course, the hero resembles a raccoon, the ex is an otter and the team of experts is a group of weirdo alien types called The Technet (or at least, half of them.)  Seems that Technet leader Gatecrasher had cashflow issues, leading half her team to go rogue.  As for Rocket himself, he’s got a plan to get into the vault that holds the deeds for his otter ex-paramour’s home river.  There’s a lovely Ocean’s Eleven vibe to the caper, with each Technetter using their wacky powers to his greater goal, even having the alien Numbers suggest that he be elected leader of the new Technet.

Sadly, that role is already taken…

LOVE ME SOME AL EWING

There are three major ticks in the win box for this issue: Once again, Al Ewing’s tendency to use abandoned bits of Marvel history to great advantage is highlighted, bringing back the Technet, who I best remember as bedeviling Excalibur back in their late 80s heyday.  Second comes the tone of the story, channeling the works of Westlake and Hammett to deliver a tense thriller with a morally ambiguous protagonist doing things he knows he shouldn’t, a tone that totally works for Rocket.  (The big puffy tail is just icing on the cake.)  Third, and perhaps most important, is the sheer joy evident in writing and art, as Adam Gorham’s renditions of wacky aliens, a raccoon with a frap-gun and an explosive cartoon chicken with a temper are wonderful, and still work in the context of a hard-and-fast break-and-enter heist story.  China Doll (who looks like a glittery blue seahorse with a mohawk) being lovingly portrayed as a two-gun action junkie is wonderful, but having her be beautifully drawn in so doing makes it even better.

I’ve said it before: The name ‘Al Ewing’ on the cover is a must-buy for me, and it should be for you as well.  Springboarding off the work of Mantlo, Claremont and the excellent movie reworking equally, Rocket #1 puts our hero in a perfect, yet utter surprising, role as gentleman thief, delivering on the promise of complicated situations and reversals, featuring excellent art and an impressive swerve at the end, earning a well-deserved 4 out of 5 stars overall.  Comics don’t take on other pop culture the way they used to in the old days, but this issue manages to channel the essence of the heist into a quasi-superhero context in fine fashion, and you should really pick this one up…

A Donald Westlake novel, only Parker is a raccoon and the heist is in space... Really dynamic and fun.