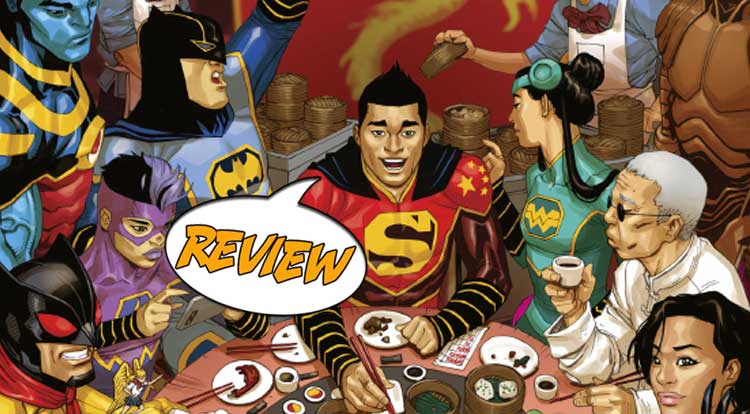 Kenan Kong may be the new Super-Man, but he’s not the first one, not even the first one in China…  And now, he has to deal with his powerful predecessor.  Your Major Spoilers review of New Super-Man #11 awaits! Previously in New Super-Man: “Dr. Omen’s deadly first experiment, the original New Super-Man of China, frees himself!  Kenan Kong may be learning to control his super abilities, but to survive an encounter with Super-Man Zero he’ll need to learn faster!  Plus, the shocking origin of the ultra-powerful All-Yang reveals a surprising connection to Kenan’s teacher-Master I-Ching!”

This issue opens underwater, with a group of scuba-divers, one of whom is Professor Zhen Shiqiang, a legendary archaeologist fellow.  We know this because a group of assassins arrives to kill him and take the unusual statue that he has tracked down in the waters: a legendary sorcerer called Monk Fahai.  While the mysterious triad takes the statue into their custody, we find New Super-Man at the I Ching Center for Martial Arts, working to find a new trigram and unlock a new super-power.  (Yes, that I Ching.)  He is frustrated at having had to stand still, but in so doing, he suddenly unlocks the power: Super-speed!  A joyful Kenan rushes off to find China’s Flash, Avery Ho, immediately challenging her to a footrace.  It’s a cute bit of character, showing off the impulsive duo, while Bat-Man and Wonder-Woman remain to be briefed on the theft of Monk Fahai.  It all comes together in the third act, as a giant dragon attacks, then is discovered to be a transformed Monk Fahai, forcing Super-Man and Flash to transition from playful banter to serious business.  Wonder-Woman nearly talks the creature down, but it suddenly notices Super-Man, grabbing him from the air.  That’s when Super-Man Zero arrives in a blur of swift and blinding violence…

This issue has a lot of excellent parts, and best of all, the transition from quiet moments to battle sequences to infodumps are all handled very well.  A little more of Wonder-Woman’s past comes to light, and Flash gets some front-and-center characterization time.  The idea of a Justice League for China is a really good one, and there’s even a joke about the reticence to create China’s Aqua-Man in these pages.  Billy Tan’s art is pretty excellent as well, delivering on the promise of young heroes trying to put all the pieces together as a new team with expressive faces and strong anatomy.  Best of all is the use of I Ching, Wonder Woman’s mentor from her early Bronze Age adventures with no powers, as part of the supporting cast, taking a character often sidelined as a joke and treating him with respect, something I’m totally behind.  (This issue’s alternate cover, featuring most of DC’s Asian heroes, is another example, as folks like Judomaster, Doctor Light and Grace were thrown aside and left in the weeds after leaving their respective teams.)

THE BOTTOM LINE: A BREATH OF FRESH AIR

The DC Universe is a tough place to make your debut, with decades of history and established characters with some of the highest cultural profiles of any fictional folks around.  That’s what makes New Super-Man #11 so impressive, as it shows us a an entirely new corner of the DCU, using the existing history to its advantage but drawing on new and different inspirations for the action and characters, earning a very impressive 4 out of 5 stars overall.  Here’s hoping that we can get fifty or more issues with this new Justice League, enough time that people will start to think of them as part of the fabric of DC’s history…

Hey, it worked for Kyle Rayner!

A solid issue, highlighting Super-Man's development as a man and a hero, as well as moments for Flash and Wonder-Woman... You should check it out!