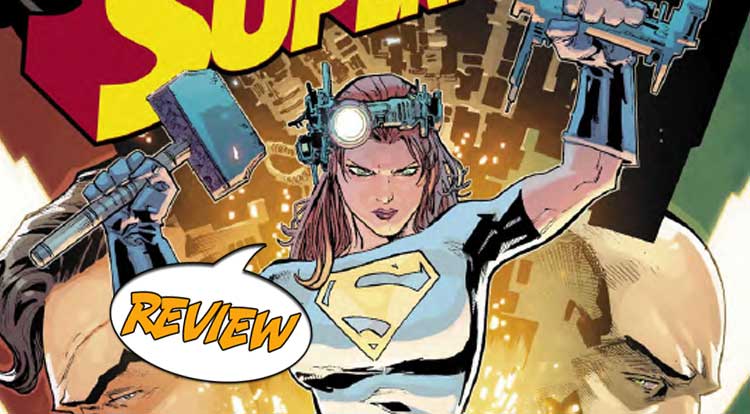 Lana Lang is coming into her own as a superhuman, but will her humanity be her saving grace or her downfall?  Your Major Spoilers review of Superwoman #10 awaits! Previously in Superwoman: “Superwoman is on the hunt for the man responsible for landing Natasha Irons’ father, Crash, in jail—the deadly Skyhook!  But Steel is urging caution, and the three heroes are at odds over how much they can trust Crash’s motives.  The true history of Steel’s family tree will be revealed as the group is torn apart…”

THE MIND OF THE HERO

A couple of issues ago, Superman lost her electromagnetic powers and super-strength and such, and has been getting by with the Insect Queen armor (which admittedly helps her to fit in better with Team Steel.)  This issue is an odd one, transitioning from a quiet conversation at the Irons family dinner table, wherein Natasha talks about her memories of her now-on-the-run-from-the-police father, Crash.  The conversation gets Lana to thinking about emotions and humanity, causing her to flashback to conversations with her high school boyfriend, Clark Kent, who has been revamped thanks to Rebirth.  In an attempt to figure out her puzzling power loss, Lana agrees to step into a test chamber that John and Natasha have built, one that forces her to face her own fears and memories.  At first, it seems that the chamber is going to be fatal, but suddenly the Insect Queen armor kicks in and her powers are restored at the last possible second.  The issue both starts and ends with a wraparound segment of Superwoman going toe-to-toe with Skyhook for the life of Zeke Irons, having finally gotten herself together as a hero…

This isn’t exactly a “quiet” issue, but it features a lot of processing, some discussions of emotion and a lot of Lana mulling over the things that make her who she is.  As such, even with the near-death experience, it feels like a parenthetical within the greater story of Skyhook stealing children and Steel’s brother on the loose.  That’s not a bad thing, honestly, and the focus on Lana as opposed to Superwoman works for me as a reader.  I have to say, I do miss Phil Jiminez on art, but Stephen Segovia does okay.  His style is different, perhaps a bit more abstract, but with so much of the issue consisting of flashbacks, dreams and mental recreations, it helps to underscore the unreality of it all.  That said, there are times where less-than-clear facial expressions and blocking undermine the story somewhat, but the final couple of pages, leading to our cliffhanger final image are quite strong…

THE BOTTOM LINE: THE POWER IS HERS

I’m 100% behind the idea of characters like Lana getting to deal with superheroing after decades of being tangential and adjacent to Superman, so I enjoy the concept of this book.  Superwoman #10 has a few wobbles in the storytelling and a really terrible villain at its core, but still manages to stick the landing and deliver the drama for 3.5 out of 5 stars overall.  There’s a lot to like in these pages, and the central characters of Lana, John Henry and Natasha are great together…

Lana Lang comes to grips with the woman and with the Super, but will it be enough to save Natasha Irons' little brother?