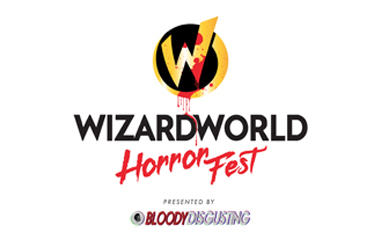 Horror fans across the country are in for a treat as Wizard World, Inc. (OTCBB:WIZD) and Bloody-Disgusting (www.bloody-disgusting.com), the most trafficked horror site on the Web, are teaming to present the Wizard World Horror Fest, held in conjunction with Wizard World Comic Cons in select cities, beginning in Philadelphia, June 1-4 at the Pennsylvania Convention Center.

“The launch of the Wizard World Horror Fest signals a new destination for fans of the genre at many of our Wizard World shows,” said John D. Maatta, Wizard World President & CEO. “They will have the opportunity to celebrate the great history of horror by meeting some of the all-time greats and viewing classic films, while keeping up with the latest developments and experiencing the fabulous, creative work that is a hallmark of this vibrant entertainment form.”

Kicking off on Thursday, June 1st & running through the 4th, the lineup for the first stop, Philadelphia, will include anniversary screenings of BUFFY THE VAMPIRE SLAYER with special guest Kristy Swanson, THE MONSTER SQUAD with stars Andre Gower & Ryan Lambert, and perhaps the very best screening of A NIGHTMARE ON ELM STREET 3: DREAM WARRIORS of all time!

On Saturday, June 3rd at Underground Arts, the festival will host the ultimate DREAM WARRIORS celebration including a live commentary & Q&A with franchise star Heather Langenkamp followed by a very special acoustic show from Don Dokken, lead singer of the iconic rock band Dokken, who performed the infamous hit single “Dream Warriors” on the film’s soundtrack. Fans can expect many more surprises & special guests throughout the evening. Tickets for this show are $20 and go on sale at 1 p.m., available by following this link: https://www.ticketfly.com/purchase/event/1486310.
The festival will also host the U.S. Premiere of DARK SIGNAL executive produced by Neil Marshall (GAME OF THRONES, THE DESCENT), and the Philadelphia Premieres of SUPER DARK TIMES (straight from its celebrated Tribeca Film Festival screening), FOUND FOOTAGE 3D (winner of the jury prize at Bruce Campbell’s Horror Film Festival), & IFC Midnight’s 68 KILL starring CRIMINAL MINDS Matthew Gray Gubler, which received its world premiere at the 2017 SXSW Film Festival.

Stay tuned for more screenings, events, special guests and panels which will be announced in the coming days.

Wizard World Comic Con events bring together thousands of fans of all ages to celebrate the best in pop culture: movies, television, gaming, live entertainment, comics, sci-fi, graphic novels, toys, original art, collectibles, contests and more. Kids 10 and under are admitted free with paid adult.
Wizard World Comic Con is also the place for cosplay, with fans young and old showing off their best costumes throughout the event. Fans dressed as every imaginable character – and some never before dreamed – will roam the convention floor and participate in the famed Wizard World Costume Contest on Saturday evening.

Official Selections:
Single tickets schedule will be released on Wednesday, May 17th. All access badges are on sale now for just $50.
BUFFY THE VAMPIRE SLAYER (1992)
D: Fran Rubel Kuzui | W: Joss Whedon
A flighty teenage cheerleader learns that she is her generation’s destined battler of vampires.
THE MONSTER SQUAD (1987)
D: Fred Dekker | W: Shane Black, Fred Dekker
A young group of monster fanatics attempt to save their hometown from Count Dracula and his monsters.
NIGHTMARE ON ELM STREET 3: DREAM WARRIORS (1987)
D: Chuck Russell | W: Wes Craven, Bruce Wagner, Frank Darabont, Chuck Russell
Survivors of undead serial killer Freddy Krueger – who stalks his victims in their dreams – learn to take control of their own dreams in order to fight back.
DARK SIGNAL (2017)
D: Edward Evers-Swindell | W: Edward Evers-Swindell, Antony Jones
The spirit of a murdered girl returns with the message for the staff of a local radio station.
68 KILL (2017)
D: Trent Haaga | W: Trent Haaga
A hard-working man’s inability to say no to beautiful women gets him in trouble when he agrees to steal $68,000.
SUPER DARK TIMES (2017)
D: Kevin Phillips | Ben Collins, Luke Piotrowski
The ’90s-set feature follows two teenage boys as they attempt to cover up a gruesome accident.
FOUND FOOTAGE 3D (2017)
D: Steven DeGennaro | W: Steven DeGennaro
A group of filmmakers sets out to make the first 3D found footage horror movie, but find themselves IN a found footage horror movie when the evil entity from their film escapes into their behind-the-scenes footage.

About Bloody Disgusting
Brad Miska and Tom Owen formed the horror lifestyle website Bloody-Disgusting.com back in 2001. The site has since become the most trafficked genre destination in the world and has tackled both distribution and production of feature films. BD is widely recognized as the leader in horror genre sites, and have become a household name after being quoted by numerous box office hits, named a top site by Entertainment Weekly in their print magazine, and giving birth to the V/H/S anthology franchise and its spinoff, SiREN. The entertainment site covers all things horror, from movies to television, music, video games and comics, and has distributed dozens of films through their BD Selects label.