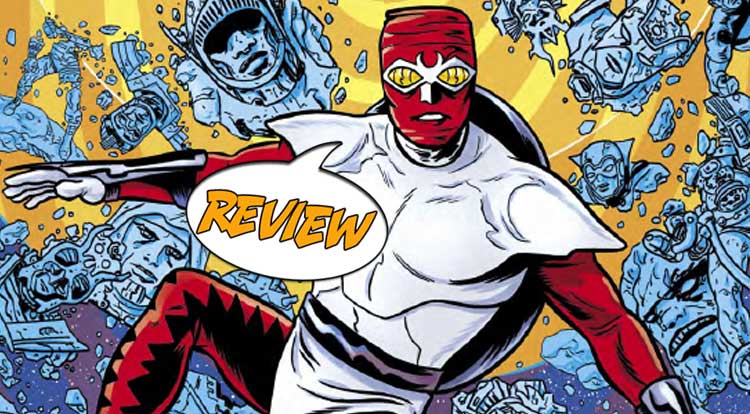 Bug! The Adventures Of Forager #1 Review

The lowest of the lower castes on New Genesis, Forager sacrificed his life long ago, during the Cosmic Odyssey.

Or so it seemed at the time…  Your Major Spoilers review of Bug! The Adventures Of Forager #1 awaits! Previously in Bug! The Adventures Of Forager: “Evolving from the “micro-life” spread on New Genesis during their war with Apokolips, Forager’s people are a society of humanoid bugs that thrive in colonies beneath the surface of the planet…  Although Forager was raised among the insect nation, it is implied that he is in fact not of their species and may be from the race of gods.  When the bug society is threatened, Forager is sent by his colony’s rulers to entreat the gods for aid. With help from Orion and Lightray, he prevents Mantis from slaughtering the bug species…  Initially treated as subhuman by the New Gods, particularly hot-headed Orion, Forager proves himself to be a worthy ally against the forces of Darkseid.  He is killed saving Batman’s life and preventing the destruction of Earth from the embodiment of the Anti-Life Equation…  Later Orion carries Forager’s body to the Insect empire by the decree of Highfather, and slowly comes to respect the warrior and his people.”

We open with a memory (which also serves to remind old readers of what has happened with Forager/Bug in the past and to give a new reader their first glimpse into his world), after which Bug awakens, bursting free of his cocoon!  He’s as surprised as the readers to find that he’s not dead, and stranger still, he’s awakened in the basement of an abandoned house…  Well, not entirely abandoned, as he finds himself under attack by strange creatures, monstrous weirdies of unknown origin.  During the battle, he encounters a strange ghost girl, and follows her right into another fight with two creatures who call themselves Brute and Glob, then their patron, the Bronze Age Sandman!  Revealing that Bug is dreaming, Sandman helps him awaken, only for both of them to wind up in the trap of a strange scientist, whose brain is visible under his glass-domed skull…

There is a lot going on in this issue, including several different awakenings for Bug (even he comments on how he’s starting to get tired of waking up), cameo appearances from half a dozen Jack Kirby-created characters, dominoes assembled in the shape of a Mother Box circuit and more.  Though Lee Allred’s script is a bit breakneck in its pacing, it feels perfectly apropos of a Kirby story, and Mike’s art is excellent throughout, as anyone familiar with his work should have expected.  (It’s tough to talk creative teams when they’re all called Allred, by the by.)  The issue’s cliffhanger ending doesn’t feel sudden, though, and the drama built throughout these pages is entirely earned by the story.  Forager even explains his use of the “Bug” designation, which is important given how his most memorable modern appearance had Batman emphatically shouting about how his name isn’t Bug.  There’s a joyfulness to this issue that fits in with the other Young Animal titles, while staking out its own unusual place in a Kirby-created corner of the DCU.

Some would say I’m not the target audience for the Young Animal titles, but I have yet to find one that I don’t enjoy, and this issue is no exception. Bug! The Adventures Of The Forager #1 just feels like a Jack Kirby book, full of wild ideas, exclamation points, strange occurrences and dynamic art, and the Allreds nail the Bronze Age origins of both these characters, earning a truly excellent 4.5 out of 5 stars overall.  The visuals alone would have gotten me to buy this comic, the fact that the story is energetic, creative and fun brings the whole package together as an enjoyable read…

Weird, well-written and beautifully drawn, making me wonder what our wayward insectoid will be getting up to in future issues...