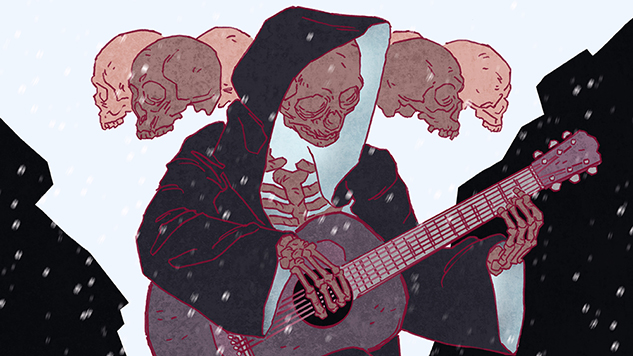 Indie publisher Z2 Comics is including something unexpected with their Free Comic Book Day release: a new song by bluesman Robert Finley and Grammy-Award winner Dan Auerbach. On May 6, fans who pick up the Z2 Comics’ Free Comic Book Day release entitled THE BALLAD OF FRANKLIN BONISTEEL will receive a link to a free, downloadable song of the classic Leadbelly song “In the Pines” as performed by Finley and Auerbach. Z2 Comics’ Free Comic Book Day title is written by Gabe Soria (LIFE SUCKS) and illustrated in glorious black and white by Warren Pleece (INCOGNEGRO); it presents a day-into-night bounty hunt for a musician who may have stolen a hit song from legendary producer Franklin Bonisteel.

“You haven’t heard “Into The Pines” performed like this before,” said Z2 Comics Co-Publisher Josh Frankel, “And you’ve never read anything like the misadventures of LA’s legendary record producer, Franklin Bonisteel.”

THE BALLAD OF FRANKLIN BONISTEEL acts as a prequel of sorts to MURDER BALLADS, the highly anticipated rock’n’roll noir graphic novel about the music industry and redemption. The highly anticipated graphic novel from Z2 Comics, which received international press attention when it was first announced, will be distributed at comic book stores and bookstores nationwide and will be available digitally via ComiXology; it is available now for pre-order.

“There’s never been a Free Comic Book Day release like this one and it’s hard to imagine a more collectible, must-have release for fans,” said Z2 Comics Co-Publisher Sridhar Reddy. “The cover of “In the Pines” is just a taste of what’s to come.”

Dan Auerbach is the singer/guitarist of the Grammy award winning rock band The Black Keys. He has a new solo album, Waiting on A Song, out June 2nd.

Robert Finley of Bernice, Louisiana, has been playing the guitar nearly all his life. At the age of 11, his father gave him some money to get new shoes – but Robert walked to town and bought a guitar instead. Robert returned to his music only recently after learning that he was going blind. A chance meeting while playing on the street with the founder of the Music Maker Relief Foundation led him to his first record deal and international tours.

Warren Pleece is a comic artist and graphic novelist with over twenty years of experience working for UK and US publishers, including 2000AD, DC Comics, Dark Horse Comics and many more.

Gabe Soria is the co-author of the graphic novel Life Sucks, published by First Second (2008). Life Sucks was picked for the American Library Association’s “Great Graphic Novels for Teens” list in 2009. Gabe has written for Batman ’66, Batman Adventures and Strange Sports Stories, and is the writer of the forthcoming “Regular Show” tie-in novel Fakespeare in the Park. His work as a music journalist has appeared in Mojo, the Guardian, the Oxford American, Blender and Arthur Magazine.