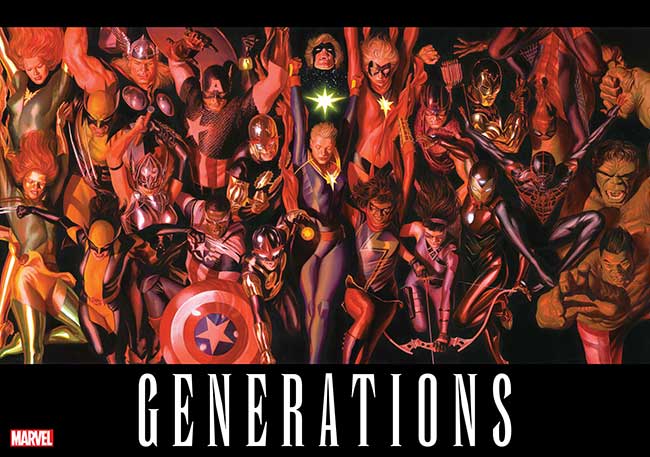 Marvel is ready to bring heroes and their legacy characters together in August for Marvel’s Generations.

GENERATIONS brings together Miles Morales and Peter Parker, Laura Kinney and Logan, Amadeus Cho and Bruce Banner, plus more, and illuminates the path that all these heroes will take into the future for a thrilling quest unlike anything seen in the Marvel Universe before.

A colossal collaboration of today’s greatest creators, Marvel’s GENERATIONS continues the evolution of the Marvel Universe as the new class of heroes stand shoulder to shoulder with those who have trail blazed their legacy.

“Marvel’s greatest icons return to the page this August, paired with the next generation of the Marvel Universe,” said Marvel EIC, Axel Alonso. “However, do all our heroes emerge from GENERATIONS as they entered, or become something greater? If you want to know where Marvel is headed in the future, you don’t want to miss GENERATIONS.”

The 10-issue maxi-series will run from August through September featuring a number of creators and artists telling the tale.

Generations: The Thunder starring The Mighty Thor and The Unworthy Thor
Written by Jason Aaron
Art by Mahmud Asrar

I’m not really sure what to think about this announcement at the moment. This isn’t technically a company wide crossover event, but for those love heroes and their legacy counterparts this might hit the right spot in your comic reading addiction.