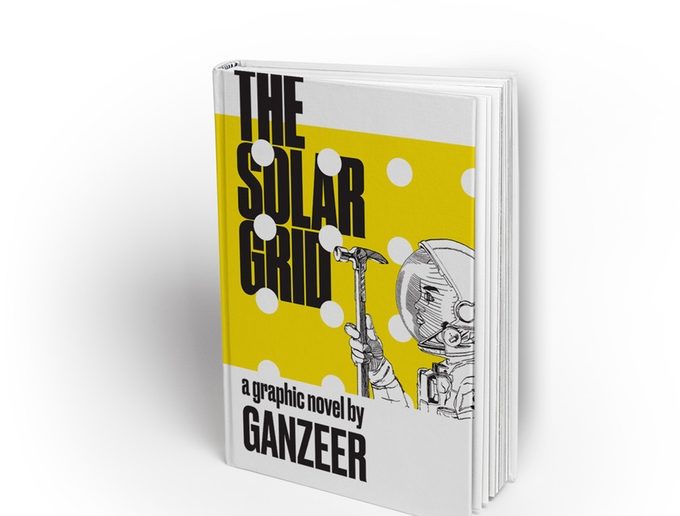 [Books] The Solar Grid gets hardcover release in 2019

The Egyptian artist most famous for revolutionary graffiti and controversial exhibitions is now crowdfunding a dystopian sci-fi epic, The Solar Grid, set to be published as a hardcover book in 2019. The first three chapters of The Solar Grid, published online, already won Ganzeer Foreign Policy’s 2016 Global Thinkers Award and garnered critical acclaim in The Guardian, Book Riot, and The Beat, among others. In order to bring the full graphic novel out in hardcover format, Ganzeer has launched a Kickstarter campaign running until May 3, 2017.

Ganzeer’s The Solar Grid is set hundreds of years after the Earth has suffered major environmental catastrophe. A vast network of satellites now keeps the planet basked in eternal daylight, powering factories that operate ceaselessly to provide goods for privileged Martians. But two orphans who rummage through the wastelands of Earth in search of valuable items from past civilizations come across something that will end this imperialistic system forever. Daring and bold, the novel touches on themes of race, postcolonialism, and climate change.

Resolutely political and innovative, Ganzeer came to international prominence during the 2011 Egyptian uprising when his regime-defiant imagery became a visual reference across Egypt and the world. A graphic designer by training, Ganzeer’s name (bicycle chain in English) reflects his firm belief that artists should be agents of change, made clear by his multidisciplinary work which includes installations, prints, paintings, videos, guerilla actions in public spaces, and now, comix.

Art in America Magazine has referred to Ganzeer’s practice as “New Realism,” while the New York Times called him a “chameleon” and the Huffington Post placed him on a list of “25 Street Artists from Around the World who are Shaking up Public Art.” In reference to The Solar Grid, Sci-Fi Addicts has named Ganzeer one of the writers most likely to continue Alan Moore’s legacy, and Warren Ellis described it as “big, complex, eccentric, with some marvellous stylistic choices and some serious intelligence.”

The campaign, chosen by Kickstarter as one of their “projects we love,” can be supported at: http://kck.st/2nkfZJX