The original Marvel Star Wars comics are still fairly easy to come by, but if you were hoping to add the original six issues that have been graded at 9.2 or above, then you better get your checkbook ready this weekend.

Heritage Auctions has all six of the original Star Wars comics up for auction this weekend. Each range in quality from Star Wars #1 with a CGC rating of 9.8, to a 9.6 rated Star Wars #2. Howard Chaykin did the original art for the six-issue series that was released before Star Wars arrived in theaters, so there are some really interesting takes on Chewbacca, Darth Vader, and the Death Star. 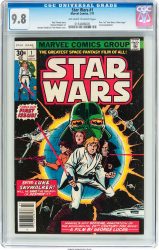 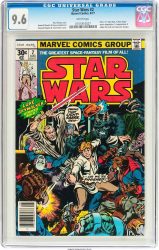 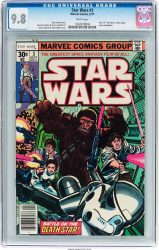 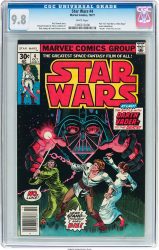 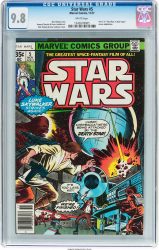 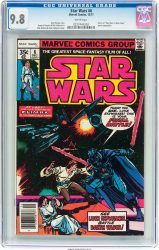 Prices are all over the place right now, with the first issue currently clocking in at over $600 (Overstreet says a 9.2 version of the issue streets for $400) all the way down to $3 for the second issue.

I was seriously interested in placing a bid on all of the issues, but then I realized tax day is just around the corner and the evil specter is leering at me once again.   Maybe you want to win these and add them to your collection – or maybe you want to win these and send them to the Major Spoilers HQ to add to our massive comic book library? In either case, if you want this, you need to place your bids now.