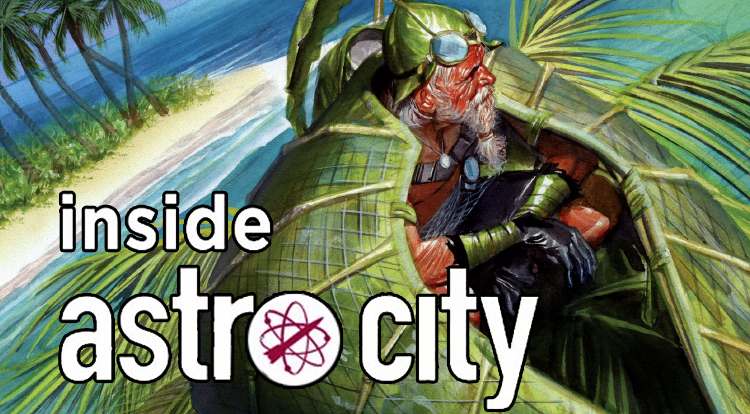 Inside Astro City #42 with Kurt Busiek

Welcome to Inside Astro City, a column focusing on the Vertigo Comics series Astro City from Kurt Busiek, Brent Anderson, and Alex Ross!  Each month, we’ll take a look at the current issue of the series, and ask series writer Kurt Busiek questions about the book.  This time around, it’s the story of the mysterious Mr. Manta with Inside Astro City #42! “The villain known as Mister Manta disappeared many years ago, lost at sea after a battle. What the world didn’t realize is that he survived, marooned onto an island with nothing but the broken down tech that he created when he first rose to power. After years of strategizing and attempting to restore his equipment with nothing but the debris that washes ashore, Mister Manta is almost ready to return to the mainland, to his glory days. Then, a cruise ship steers off course and in his direction. Is it the chance he’s been waiting for? Will this be his return debut?” MAJOR SPOILERS: First of all, kudos is due to Matt Clark for this issue’s art, which feels new and different and yet firmly an Astro City tale.  Was there a conscious effort to have the art feel stylistically like Brent’s or is he just that good?

I sat next to Matt at an Emerald City con a couple of years ago, and got to watch him sketching all weekend.  I already liked his art, but I liked the sense of character and personality he put into even con sketches. So we started talking back then about him doing an ASTRO CITY story someday.  It took a while, but this is what we finally got to collaborate on.  I think Matt’s work harmonizes with Brent’s because they’ve both got a strongly classical sense of comics art, drawing lean heroic figures.  Matt’s a bit more linear, and Brent’s a bit more form-oriented, but they’re coming from similar roots.

Anyway, we didn’t ask Matt to try to draw like Brent, we just asked him to tell the story well, and he absolutely delivered. This won’t be his last ASTRO CITY tale — we’re already talking through another one, for when he can fit it in his schedule. MS: Mister Manta’s fish-out-of-water (sorry) experiences after years of solitude on his island is overwhelming and leaves him back where he started, with a reaction is somewhat reminiscent of agoraphobia or social anxiety disorders.  Was this an intentional parallel on your part?

KB: I don’t know that it’s a parallel — he probably does have some sort of anxiety disorder after all that time alone.  But it’s probably not agoraphobia, since he’s been living in the wide open for decades, and is comfortable there.  The noise and people and movement all around him is freaking him out — it’s not exactly claustrophobia either, but he feels hemmed in by it, with no place to turn.

It’s sensory overload, something I experience every time I walk into a large comics convention.  I’m used to working alone in a room, with my dog there for company, and he doesn’t talk much.  If my wife and kids come in, that’s four people, and that can feel like a crowd.  So put me in a room with thousands of people, and I’m overwhelmed; I don’t know what to pay attention to, and all the sensory input is confusing and sometimes disorienting.  Mister Manta gets that, but in a way exaggerated form.

I just figured that he had all these dreams, but he’s acclimated to the island, and that makes it tough to switch back. And there’s a story in that… MS: Both Mister Manta designs are remarkable, and I found myself relating to him as though I had read dozens of Mermaid adventures featuring his villainy.  Is it difficult to construct a story that successfully references continuity that has never actually been presented?

KB: It’s a little bit tricky — on the one hand, you get to make it all up, so it’s easier than referencing continuity that already exists, and might not serve your purposes, but on the other it needs to _feel_ like there’s a whole history there, that this could be a guy with a career as long and storied as, say, the Fisherman or Black Manta or one of those other costumed aquatic villains Aquaman keeps crossing paths with.  What we show needs to imply the rest of the picture, so the few examples we choose to show need to suggest a variety of experiences over a period of years that formed him into who he is.

It’s fun to do, to make readers imagine a whole career they haven’t seen, and make it serve the story. MS: I am especially enamored of how Mermaid has been allowed to age in a realistic manner (or more realistic, since my math has her likely being well over 70) looking like a superhero while clearly being older than the usual 29 years old.  Any chance we’ll get more of her story any time soon?

KB: I’m pretty sure we’ll see more of her at some point, but I don’t know when.  But yes, she’s aged well — she moisturizes thoroughly.

A next-generation mer-hero on Honor Guard is also a possibility, of course. MS: The last hundred issues are full of incredibly memorable single issue stories like this one, as well as major arcs like The Confessor or Winged Victory’s stories.  Are these self-contained stories easier to create than multi-issue arcs?

KB: It depends on the story!

If it’s a story that can fit neatly into 24 pages, sure, it’s easier to do a single story structure than to write multiple chapters that have to add up to a complete story on their own and at the same time be satisfying chapter-to-chapter.  But not all story ideas work at that length — it’s easier to do an ongoing, rambling story where you can let it expand as it needs than it is to do a self-contained single-issue story.  It’s a matter of knowing which is which, which ideas need more room and which will work as a single-issue pop.

But the single-issue stories are fun to do, too.  There’s a satisfaction to a nice, elegant, done-in-one story.

Then, of course, you need a whole new idea for next month… MS: How about what to expect from #43, since all the solicits I can find say that it will be this issue?

KB: Ha!  It’s what the solicits said was last issue — the story of the Gentleman and the Bouncing Beatnik up against Lord Saampa and the Cult of the Serpent God.  Or at least, it’s the Broken Man’s attempt to tell you this story, because he gets kind of a curveball thrown at him at the bottom of the first page, and things go a bit awry thereafter.

But it’s the next chapter of the Broken Man’s tour through the Broken Century, full of secrets and revelations and dangerous daddios. Astro City #43: “At long last, it’s the origin of the Gentleman! Lord Saampa and his Serpent Cult strike in the U.S.…but are they here to serve their scaly god, or to save a soul? And either way, can the Gentleman stop them? Plus: Another incarnation of Astro City’s counterculture champions—this time, one you’ve seen before!”