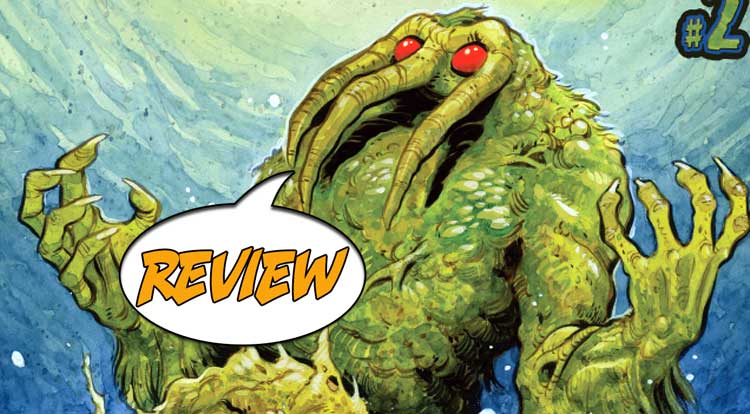 With his mind back for the first time in years, Man-Thing now has to face the one foe he may not be able to burn:  Himself?  It’s all very meta…  Your Major Spoilers review of Man-Thing #2 awaits! Previously in Man-Thing: “After working to regain his mind and speaking abilities, Man-Thing went and did what anyone with half a mind and the ability to speak WOULD do — he got into show business!  Unfortunately, test audiences weren’t too keen on his swampy looks, so he was promptly fired.  After wandering the streets of Burbank like a rejected extra, Man-Thing rain into someone he recognized — HIMSELF!”

After last issue’s events, Man-Thing finds himself face to face with another Man-Thing in the streets of Burbank, battling for his humanity.  The silent Man-Thing overcomes our hero, and the two merge into one massive swamp body, immediately snapping back through a dimensional portal to the Florida swamp that is his home/prison.  Immediately, he finds himself under attack by bats, by vultures, even a giant alligator.  Worse still, losing the battle with his beastie self has robbed him of his ability to speak, leaving him unable to explain to the woman the alligator is trying to eat that he knows her, that he is actually Ted Sallis, her ex-boyfriend.  As he tries to get through to her, a pair of giant pythons (!!) attack, and his old friend Lily-Ann is dragged away into the swamp.  After an encounter with her friend, Man-Thing makes his way to the Oldfather, who oversees the swamp and the Nexus Of All Realities, only to find him gone and the Nexus wide open to any number of strange creatures…

FRENETIC, BUT NOT ALWAYS IN THE GOOD WAY

The thing about Man-Thing is, his adventures are subject to massive changes from issue to issue, so the sudden arrival of Stine’s sarcastic voice and love of silly puns isn’t a huge adjustment to make.  The action in this issue is really fast-paced and makes the issue feel packed with incidence, but also feels a little too frenetic for my tastes.  The art is really solid, though, as German Peralta makes even the sight of a muck-monster being dive-bombed by red-eyed bats feel real and important.  Though I’m a bit skeptical about the sudden appearance of an important figure from Ted’s past, it can all be chalked up to the strangeness with the Nexus.  I’m not sure I can predict where this one is going to end up, and that’s a good thing.  The second half of the issue is a ‘Goosebumps’ style tale of virtual reality and foolish decisions, one that ends with a perfect black comedy stinger, but doesn’t really grab me enough to overcome any of the issues I have with the main feature.

THE BOTTOM LINE: LIKEABLE, BUT SCATTERSHOT

On the one hand, this issue is a fast read that is filled with a lot of things happening, and the sarcastic voice of Ted Sallis in the Man-Thing’s head is amusing.  On the other, this issue piles on the random encounters, teleports the character across the country suddenly, introduces what might be important characters before quickly shuffling them off-stage for more strangeness, which undercuts some of the best parts of the dialogue and story.  Man-Thing #2 nonetheless falls on the winning side, thanks to some excellent art and a strong narrative voice through the madness, ending up with a better-than-average 3 out of 5 stars overall.  I’ll be interested to read this five-issue series collected all in one place, to see if the pacing works better in that collected form…